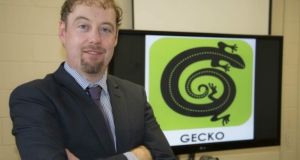 Gecko Governance is looking to raise $20 million (€17.7m) via an initial coin offering (ICO), with funds raised to be used to develop a new global compliance solution.

The regulatory tech (regtech) company has received a licence from regulators in the Isle of Man to launch the ICO, which is open to investors worldwide.

Akin to an initial public offering (IPO), in which investors swap their money for shares in a company, an ICO allows backers to invest in a company by acquiring crypto tokens.

Winner of the 2016 InterTradeIreland Seedcorn competition, Dundalk-based Gecko has created software for the financial services sector that allows fund managers to meet regulatory and compliance requirements.

The company, which is headed by Shane Brett, uses a blockchain-based system to ensure that those using its financial services solution have access to data that is live and can be independently verified and audited. It now plans to extend the solution to cover token sales, a fast-growing global market that is coming under increasing scrutiny by regulators worldwide.

“In just a few years growth in token sales has accelerated at a surprising rate, with organisations raising $6.8 billion last year alone. We believe that even with this rapid growth there is pent-up demand waiting to be unlocked if the market can demonstrate greater transparency and accountability,” said Mr Brett.

“With Gecko Crypto1 we will be able to offer a compliance system that will bring transparency to token sales, unlocking the market’s full potential by allowing a new investor base, such as large institutions, the opportunity to participate with confidence.”

Gecko earlier this year received $1 million in funding from tech investment firm Cosimo Ventures, which has offices in Dublin and Boston.

It is not the first Irish company to turn to an ICO to secure investment. Dublin-based Living Offset announced plans to raise $20 million through one earlier this year.