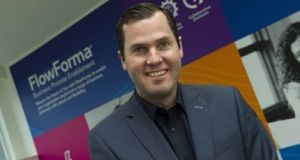 FlowForma chief executive Neil Young said the fintech company expected to double its current workforce of 30 in the next two years.

FlowForma, a Dublin-based tech company spun-out of IT services group Ergo, is seeking to secure additional capital as it looks to make the most of a big jump in projected revenues.

FlowForma, which does not disclose revenues, is in active discussions with investors currently.

“The next phase to support the 100 per cent year-on-year growth may involve external funding to propel expansion into the US,” chief executive Neil Young told The Irish Times.

FlowForma is a forms management tool with business process functionality that was developed by Ergo, the group owned by IT veteran John Purdy.

It was spun out as a separate company from its parent in 2016. This marked the second spin-off for Ergo, which sold its 20 per cent shareholding in fintech firm Fenergo to US private-equity firm Insight Partners for $75 million in 2015.

Mr Young said FlowForma has a thriving business in Britain that the company was looking to build on. The company is starting to make inroads into the US market, he added.

“We’ve grown from three to 30 employees in two years and fully expect to double that number again in the next two years,” he said.

1 Parts of Brown Thomas and Arnotts to reopen next week
2 Should my mam wait for house prices to drop before buying?
3 Hangover for the drinks sector as pint sales go flat
4 Brother is dragging his heels as executor of uncle’s will - is there anything I can do?
5 Covid-19 mortgage breaks: What’s the catch?
Real news has value SUBSCRIBE