Thin, light device holds its own but is let down slightly by battery life and lack of ports 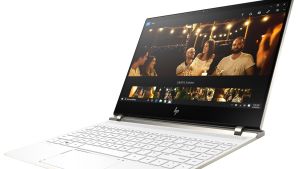 Where to buy: hp.com

Laptops were supposed to be obsolete by now. Or at least that was the thinking a few years ago. Tablets would take over, and combined with the increasing size of smartphones, most people would have no need for a laptop in their lives.

That hasn’t happened. Laptops may have taken a hit to sales from the popularity of tablets, but manufacturers are still putting out decent devices that are worth the investment if you need something a bit more practical than a small tablet.

The 2018 version of the HP Spectre 13.3in is still sleek and well-designed. The laptop reviewed here is white with gold accents, with a 13.3in 4K touchscreen. Despite its size it doesn’t feel flimsy, particularly around the hinge, an area where other laptops have suffered. It feels like it would stand up to some serious use.

Lightweight at 1.1 kg, the Spectre 13 crams a lot inside its slim frame. It comes with an Intel Core i7 chip, 8GB of RAM and 256GB solid state storage.

It all adds up to a thin, light and ultraportable device that more than holds its own with the best Apple and other Windows PC makers have to offer.

Part of the trade-off for this portability is regarding ports. On the back is one USB C port that doubles as the charger, and two USB C Thunderbolt ports. A headphone jack is on the opposite side of the frame. If you are looking for any other connections, you’ll be disappointed. Your future has a lot of adapters in it – one of which HP includes in the box – so be prepared for a lot of inconvenience.

Bang & Olufsen speakers provide decent oomph in the audio, although the small size of the laptop is going to limit the impact they have. Still, they are fine for watching movies or for video calling, two of the most common uses during this review.

There are some things that are non-negotiable for me when I’m looking at laptops. One of those is the keyboard: it needs to be comfortable to type on, with keys spaced so typos are kept to a minimum. For the most part, the Spectre 13’s keyboard works well, although the positioning of a few keys leads to some mistakes – something I’ve experienced with other 13in laptops too.

Performance-wise, the Spectre 13 deals with most things your throw at it admirably. With that chip and 8GB of RAM, though, you would expect it to run smoothly for almost every task.

Battery life is where it lets itself down. At best, it can be described as okay, but it falls short of expectations. A full charge lasts a few hours, but when rivals are sacrificing a little on form to get battery life closer to 10 hours, realistically it’s a sacrifice that would be worth making. It’s not an issue if you are near a power outlet but take this laptop on the move and you’ll find that you have to recharge before long.

The design of the Spectre 13 is polished and sleek. It’s not the type of laptop that fits into the “function over fashion” box; that’s not to say that it falls down on the function front either. The laptop works well, barely stuttering when the 4K display is detailed and bright; however, I’m not convinced at that size you wouldn’t get by with a slightly lower resolution.

Battery life. Rivals are reaching 10 hours, but the Spectre falls short of this. I comfortably got five hours out of this device, but depending on how much pressure I was putting on it, that varied.

HP includes a USB C adapter in the box, which is one less thing you’ll have to buy.

The Spectre 13 looks great and matches that with great performance. The one downside is the battery life.

1 Should my mam wait for house prices to drop before buying?
2 Brother is dragging his heels as executor of uncle’s will - is there anything I can do?
3 Apple tax case: Four individual lawyers paid over €500,000 each
4 Parts of Brown Thomas and Arnotts to reopen next week
5 Covid-19 mortgage breaks: What’s the catch?
Real news has value SUBSCRIBE