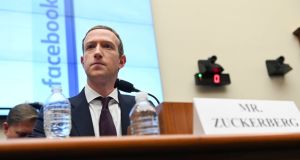 Some of the richest men in history representing the most valuable companies ever created will be grilled by Congress on Wednesday , as US authorities get increasingly serious about whether tech giants Amazon, Apple, Facebook and Alphabet have become too powerful.

The extraordinary hearing will see Amazon’s Jeff Bezos, Apple’s Tim Cook, Facebook’s Mark Zuckerberg and Google owner Alphabet’s Sundar Pichai called to account for the market dominance of their companies - dominance that many say was achieved through anti-competitive business practices.

When the US House judiciary committee gavels into order its upcoming antitrust hearing the four star witnesses will represent more than $275 billion (€233.8 billion) in combined personal net worth - and more than $4.8trillion in market value.

Wednesday’s hearing follows more than a year of investigation by the House antitrust subcommittee, whose chair, representative David Cicilline, began a broad inquiry into the market power of the tech giants after the Democrats retook control of the House in 2018.

The House investigation, along with separate moves by the Federal Trade Commission and justice department, represents the first time that federal regulators have taken a hard look at the tech industry since the Microsoft case in the 1990s. Over the intervening decades, a new generation of tech behemoths have come to dominate even more aspects of the economy with little if any scrutiny from regulators in the US.

The issues at question are complex and important; the questioning at congressional hearings often is not. When Mr Pichai last testified before the House, one congressman asked him a question about his granddaughter’s iPhone, giving Mr Pichai a chance to point out that, dominant as Google may be, it is not responsible for Apple products.

Here’s a preview of some questions these titans of technology should face on Wednesday:

Amazon is not only the largest retailer in the world, but the largest cloud computing company as well. The company has grown even larger by running a marketplace where third-party companies can sell their products, for a fee. Many critics argue that Amazon should not be allowed to both run the marketplace and compete within it, comparing the situation to Amazon being both player and referee - an unfair advantage over the other team. Why should it be allowed to maintain this advantage?

For years, third-party sellers that use Amazon’s marketplace have suspected that Amazon uses sales data to launch competing products under its own private labels. Last year, an Amazon executive testified under oath that Amazon does not do this; but in April, the Wall Street Journal reported that it was “standard operating practice”. Did Amazon’s executive lie?

Amazon is a provider of cloud computing services, and some of its customers are also its competitors. Does it ever use data from its cloud customers to inform decisions about competing products?

Amazon is also an investor. Has Amazon ever used its role as a startup investor to inform the development of competing products?

The coronavirus pandemic has led to a surge in demand, driving Amazon’s business to near peak holiday season levels. Have Amazon executives discussed taking advantage of the pandemic to move into new markets or extend its dominance of existing markets?

There are 900million iPhone users in the world, and the only way they can download apps to their phones is through the App Store, which Apple controls. Apple gets to decide which apps can be in the store, and takes a substantial cut of their sales. How does that gatekeeping affect consumers?

Apple has repeatedly copied features from third-party apps, incorporating them into its operating system and rendering them obsolete. Why should that practice continue to be allowed?

Last month, the developers behind the email app Hey went public with a chilling complaint: that Apple was requiring it to use its in-app payment tools - and fork over a 30 per cent commission - or the app would be booted from the App Store. Why does Apple deserve such a large cut of other companies’ revenues?

Earlier this month, many major US tech companies said they would stop cooperating with law enforcement requests for user data from Hong Kong authorities following the passage of national security laws imposed by Beijing. Apple did not. Does Apple’s reliance on China as a market and supplier compromise its commitment to human rights? Will Apple provide Beijing with the personal data of dissidents?

Google had $162 billion in revenues last year, but that number hardly captures its dominance in products such as maps, email, web browsing and more. It all stems from the first product, search: Google handles more than 90 per cent of all search queries worldwide. How is this a healthy competitive market?

Google’s dominance in search gives it unprecedented power to shape the information that reaches billions of people around the world. And Google has at times struggled to ensure that that information is of high quality. How does the company plan to improve search results? And should a single company have that much power in defining what the world gets to read?

For a time, the number of people using Facebook was larger than any other category of humans on Earth other than followers of Christianity; then Facebook grew even bigger. In recent years, Facebook has acquired Instagram, WhatsApp, Onavo, Oculus, CrowdTangle and Giphy. It tried to acquire SnapChat, then copied its most popular feature. It recently launched copycat versions of rivals Houseparty and TikTok. Is there a rival social media app that has gained popularity in recent years that it did not either acquire or copy?

On June 26th, amid a growing ad boycott over Facebook’s failure to curb hate speech, Mr Zuckerberg reassured employees that “all these advertisers will be back on the platform soon enough”. What made him so confident that advertisers would have no choice but to return to the platform, whether or not it fixed the hate speech problem?

Facebook has responded to criticism of its record on hate by pointing to the vast amount of content published every day claiming that it automatically deletes nearly 90 per cent of hate speech before anyone flags it. If Facebook is too big to prevent its product from being used to incite genocide and mob violence, isn’t it too big to exist?