Cook reports revenue and profit ahead of market expectations 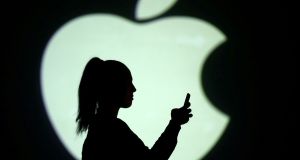 Apple also gave a revenue forecast for the quarter ending in March above Wall Street expectations.

Apple has reported sales and profits for the holiday shopping quarter above Wall Street expectations, powered by a rise in iPhone sales for the first time in a year and soaring demand for add-ons such as AirPods wireless headphones.

But even though Apple executives set a new target of 600 million paid subscribers on its platform by the end of calendar 2020, the company’s closely watched services business, which includes its new Apple TV+ streaming offering, missed Wall Street’s targets.

Apple’s total number of installed devices grew by 100 million to more than 1.5 billion over the past year.

Apple gave a revenue forecast for the quarter ending in March above Wall Street expectations. But chief executive Tim Cook said the company was using a wider-than-normal prediction range because of the uncertainty created by the coronavirus outbreak in China, where many of Apple’s suppliers are based.

Apple posted $91.8 billion (€83.3 billion) in revenue for the quarter ended December 28th, compared with analyst estimates of $88.5 billion, according to IBES data from Refinitiv.

The company forecast $63.0 billion to $67.0 billion in revenue for the quarter ending in March, ahead of estimates of $62.4 billion, showing it believes that its phones and other devices such as AirPods wireless headphones will continue to sell well during what is often a slow time of year.

Apple’s share price has more than doubled since Mr Cook warned a year ago that the company was likely to miss financial targets for its biggest sales quarter of its fiscal 2019. In the year since, Apple slashed prices in China, one of its most important markets, to rekindle sales there. The company also made a push into paid services, rolling out a credit card with Goldman Sachs and subscription gaming and television services last year.

Apple reported services revenue of $12.7 billion, below analyst estimates of $13 billion, and up from $10.9 billion the year before. Many investors think that services revenue eventually will boost Apple’s gross margins, which were 38.35 per cent in the December quarter compared with estimates of 38.06 per cent.

The shift toward services, however, depends on Apple continuing to grow its base of users and sign them up for recurring subscriptions that analysts view as potentially more lucrative than hardware sales, which can be inconsistent because they are large purchases that consumers make only every few years.

Mr Cook said the company expects surpass its previously stated goal of 500 million subscribers for 2020 during the current quarter ended in March, ahead of schedule.

He said Apple is establishing a new goal of 600 million subscribers by the end of the calendar year. “We’re really proud of 100 million [user] growth in the installed base. That’s huge. And that’s a testament to the new customers we brought in, the switchers,” Mr Cook said.

He described the Apple TV+ subscription streaming video service released last autumn was a “rousing success” and said it is “very strong, both the people that are getting it in the bundle and the people that are paying for it that haven’t bought a new device”. – Reuters

1 How can I view my dead brother’s will if I’m not the executor?
2 Michel Barnier rejects UK’s call for Canada-style trade deal
3 Applications for 961 new homes in Dublin and Meath rejected
4 Aqua Dome in Tralee could close over insurance claims, directors warn
5 Facebook faces tax court trial in US over Irish offshore deal
Real news has value SUBSCRIBE