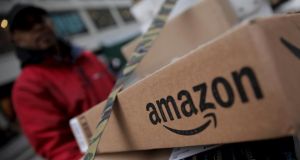 Amazon said net income fell to $197 million, or 40 cents per share, in the second quarter, from $857 million, or $1.78 per share, a year earlier. Photograph: Mike Segar/Reuters

Amazon reported a 77 per cent slump in quarterly profit as the company invests heavily in areas such as video content and in fast-growing economies such as India.

The company’s shares, already up nearly 41 per cent this year, were down 2.6 per cent at $1,019 in after-hours trading on Thursday. The shares touched a record high of $1,083.31 in regular trading, helping chief executive Jeff Bezos briefly unseat fellow tech billionaire Bill Gates to become the world’s richest person, according to Forbes.

Amazon is known for making bold investments in new business areas even at the expense of profits, a strategy that is often criticised by investors.

Amazon, which is in the process of buying upscale US grocery chain Whole Foods Market, also plans to create more than 130,000 full-time and part-time jobs by mid-2018 to speed up delivery. Analysts had expected a profit of $1.42 per share and revenue of $37.18 billion. – (Reuters)