Turnover at marketing software company increases by 82 per cent to €42.7 million 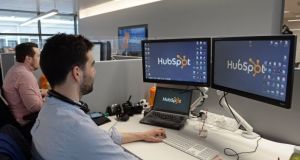 The Irish subsidiary of US marketing software firm HubSpot saw losses rise by 94 per cent last year despite turnover jumping to €42.7 million

Latest accounts for HubSpot Ireland Ltd show it recorded a €3.15 million loss in 2016 compared with a €183,009 deficit a year earlier.

The company attributed the rise in losses to recruitment-linked expenditure. Administrative expenses ballooned to €34.2 million from €19.2 million last year while cost of sales jumped from €4 million to €11.6 million.

The accounts show it employed 214 people in Ireland last year, up from 135 in 2015. Staff-related expenses, including wages and salaries, jumped to €21.9 million from €14.1 million.

The rise in losses come as turnover increased from €23.4 million in 2015, having more than doubled a year earlier from €10.5 million on the back of the launch of new products and an increase in customer numbers.

A breakdown of turnover shows €35.7 million came from subscriptions with a further €4.5 million from intercompany revenues, and €2.5 million from professional services.

Ireland accounted for €425,325 in turnover, down from €678,371 in the prior year. Some €34 million in revenue came from Europe (excluding Ireland), while €5.2 million was from North America and €3 million from other regions.

Last year, HubSpot, which first established operations in Ireland in September 2012, announced plans to increase headcount to more than 500 over the next three years after it relocated to new offices in the IFSC.

In January, the company entered into a new 19-year lease in Dublin’s docklands to accommodate its additional workforce. It expects to pay about $9.89 million in rent over the initial 10-year lease period.

HubSpot, which was founded by Brian Halligan and Dharmesh Shan in June 2006 at Massachusetts Institute of Technology, has more than 30,000 customers in 90 countries.