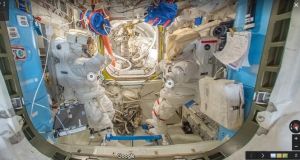 Street View worked with Nasa to design a gravity-free method of collecting imagery using DSLR cameras and equipment already on the ISS.

From the Amazon rainforest to Antarctica, Google’s interactive 360-degree panoramic Street View technology has taken users to some pretty remote places on planet Earth but this marks the first time it takes us on a journey of exploration outside Earth. Google worked with the European Space Agency (ESA) and Nasa to map out the 15 interconnected modules that make up the International Space Station (ISS) complete with a new feature – annotations – to help virtual explorers get to know the various locations and components within ISS.

“Because of the particular constraints of living and working in space, it wasn’t possible to collect Street View using Google’s usual methods,’ explained Thomas Pesquet, an ESA astronaut who worked on the project.

“Instead, the Street View team worked with Nasa at the Johnson Space Centre in Houston, Texas, and Marshall Space Flight Centre in Huntsville, Alabama, to design a gravity-free method of collecting the imagery using DSLR cameras and equipment already on the ISS.”

Pesquet himself took many still images around the space station, which were then transmitted back to Earth and stitched together to create the resulting 360-degree panoramic imagery that gives us a glimpse into life on board ISS.

1 ‘Saudi Arabia is where the opportunities will happen in future’
2 How safe is it to go back to the office?
3 MSD buys Takeda biologics plant in Dunboyne
4 Data centres will force State to choose between climate and investment
5 The first seven winners of Business Person of the Month
Real news has value SUBSCRIBE