Datalex revenues surge on back of moves into Chinese market

Travel software firm points to deals with Lufthansa and IBM, among others 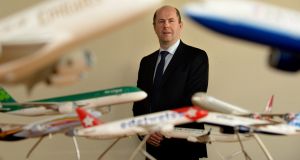 Travel software firm Datalex has reported strong results for 2016,with revenue up 19 per cent and after-tax profits rose 29 per cent.

Datalex, which offers digital commerce and retail solutions for the travel industry, said platform revenues in 2016 rose 15 per cent to $26.4 million (€24.3 million), as new contracts went live and the customers brought on board in the previous year had an impact.

Professional services revenue increased 30 per cent to $26.7 million over the year as existing customers sought additional product enhancements and new customers came on board.

Adjusted earnings before interest, tax, depreciation and amortisation were $12.2 million for the year, while profits after tax were 29 per cent higher, at 5.4 million.

Costs also increased over the year, rising 18 per cent to $50.1 million, driven by wages and consultant costs. Datalex increased its staff by 80 during 2016, adding new roles in product management, software development and sales.

The company said it was proposing a 25 per cent increase in dividends, to 5 cent per share.

Datalex pointed to a number of developments that would help future growth, including deals with Swiss International Airlines, the Lufthansa Group and partnerships with IBM and Neusoft. The latter collaboration will help boost the company in the Chinese market, it said.

“2016 was another year of strong performance and growth for Datalex, which further strengthens our position as a leader in digital commerce for travel retailers,” said chief executive Aidan Brogan. “Our selection by the Lufthansa Group and our new partnership with IBM represent significant validations of both our product and our market strategy.

“As a result, we are seeing a strengthening of our pipeline of new business opportunities, particularly among larger carriers.”

“From a strategic perspective,” he wrote, “we see this continued momentum in the Chinese market as encouraging and believe there is scope for further signings in the region. Additionally, the Lufthansa contract, which we think is likely to encompass the entire digital platform, provided Datalex with further impetus in engaging with the world’s leading Tier 1 airlines.

“Finally, the partnerships with IBM and Neusoft add credibility and stimulus to Datalex’s long-term growth aspirations.”

1 Ireland has fifth-largest number of billionaires per capita in the world, says Oxfam
2 Boeing’s 737 Max will fly again in 2020, Avolon predicts
3 Chris Johns: Ireland risks populist culture war over property and pensions
4 Companies should not use the climate crisis as a scapegoat
5 State-backed Finance Ireland weighs stock market flotation in 2020
Real news has value SUBSCRIBE