Record export figure not a cause for unbridled celebration 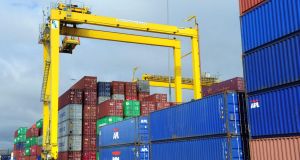 In trade there seems to be a cloud for every silver lining. Photograph: Aidan Crawley/Bloomberg

With record exports of €140 billion last year, it looks on paper as if the State’s businesses have been paying attention to government calls to expand their global footprint.

A 15 per cent bump in exports and a 14 per cent rise in imports to €90.2 billion is nothing to be sniffed at. But lest businesses see this as an opportunity to take a break, it must be noted that the headline figures don’t tell the full story.

In both the medical and aircraft examples above, the benefits will fall largely to global pharma companies and aircraft lessors. Of course both pay taxes and employ people in the Republic, but their success is perhaps not as widely felt as it would be in the non-multinational sectors. And, more worryingly, the figures detail our heavy reliance on both those sectors for trade. Pharma exports accounted for 33 per cent of all exports last year while aircraft imports accounted for 23 per cent of total imports.

Then when we look at the food sector, the one getting the most attention in the Brexit era, the figures are poor, with exports actually falling last year while imports rose.

Of yet more concern is our reliance on the UK for imports, which increased last year, even though the percentage of imports from the UK out of total EU trade dipped to 36.5 per cent (from 40 per cent in 2017). The volume of exports to the UK also fell slightly.

It was expected that 2018 would be the year of change, a year in which we would broaden our trade horizons, particularly in the food sector. And while this has occurred to some degree, it has happened in sectors that, although good for the economy as a whole, will pass little benefit to the majority of Irish citizens.

In trade there seems to be a cloud for every silver lining.