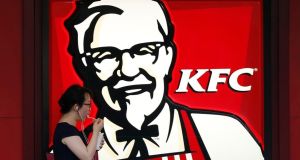 A customer walks past a KFC store. Photograph: REUTERS/Aly Song

A legal row has broken out between the owners of the Omni Park shopping centre in Dublin, which includes the McKeon family of builders and private clients of stockbroker Goodbody, and an Irish Kentucky Fried Chicken franchise owned by Raju and Sundeep Tuli, wealthy Scottish investors who have extensive Irish interests.

The legal dispute concerns the decision by the Tuli brothers, who also own major Costa Coffee and Pizza Hut franchises in Ireland, to shut down the KFC restaurant at the Omni centre last year. The Santry-based Omni’s owners have instigated a High Court action as part of a financial dispute over the move.

The Tuli brothers run their restaurant franchises in this State using companies including Tuli Holdings and also MBCC Foods (Ireland), which had sales last year of more than €94 million and employed about 1,700 workers. It made profits of more than €10 million, recent accounts show.

The brothers are in expansion mode here, and MBCC’s accounts state it opened a further eight Costa Coffee outlets last year. It also acquired five new properties to enable it to expand “throughout Ireland”.

The accounts note, however, that their Omni centre KFC restaurant was shuttered at the end of last September.

It is understood MBCC negotiated a lease for the restaurant at the tail end of the Celtic Tiger boom, and opened on the site in October 2008, just as the financial crisis was coming to a crescendo and the economy was nosediving.

The Tuli brothers’ company is understood to have signed a 20-year lease on the Omni outlet at a boomtime rent. MBCC, however, closed the restaurant after 10 years, after it concluded it was entitled to do this under a break clause.

A legal row has broken out between MBCC and the Omni over its decision to close the restaurant and whether it was entitled to exercise a break clause.

This month, two companies linked to the Omni sought a summary judgment against MBCC for debts allegedly owned on the Santry KFC outlet.

The case was lodged by Ambasaid, which is linked to a fund for wealthy clients of Goodbody stockbrokers, while the other plaintiff is MKN Investments, which is a company controlled by the family of well-known house builder Sean McKeon.

A spokesperson for MBCC confirmed it is disputing the claim by the Omni owners, and insisted: “We do not owe any money regarding the former KFC at the Omni. We validly departed the centre via a break clause.”

Goodbody declined to comment, while MKN was unavailable for comment. The well-known KFC Irish franchise run by businessman Michael Herbert is an entirely separate operation, and unrelated to the Tuli-Omni case.

MBCC continues to operate a Costa Coffee at the Omni, which is also unaffected by the row.

The Tuli brothers originally made their fortune in Scotland operating the Jean Scene retail franchise.