Food prices could jump 45% in a hard Brexit, retailers warn 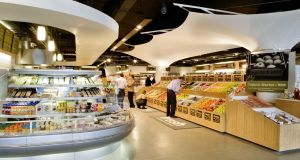 Food prices could rise by up to 45% in the event of a hard Brexit and WTO tariffs being applied, according to retail bodies in Ireland and Britain.

The price of everyday food items across Ireland and Britain could jump by up to 45 per cent and there is every possibility there could also be “reduced availability” of some goods in the event of a no-deal Brexit, retail industry leaders on both sides of the Irish Sea have warned.

Retail organisations in the Republic, Northern Ireland and the UK have joined together to issue a stark warning about the immediate impact that a hard Brexit could have on the retail sector, which they say could be exposed to increased tariffs and potential supply issues.

Aodhán Connolly, director of the Northern Ireland Retail Consortium, Thomas Burke, director of Retail Ireland (an Ibec affiliate), and William Bain, head of EU and international at the British Retail Consortium, agree that increased tariffs could result in price hikes of up to 45 per cent on some everyday food items should the UK and the EU revert to World Trade Organisation Most Favoured Nation Tariffs.

“A hard Brexit means a hard border and the disintegration of supply chains that have been built up over 40 years of EU membership. This is not a binary choice for Northern Ireland between trade with the UK and trade with the EU. Our economy is built on access to both markets and we need that to survive. No-deal makes NI a less competitive place to do business and a more expensive place to live.”

“Regardless of the type of Brexit agreed over the coming weeks, retailers will see an increase in their operating costs arising from checks at ports and other supply chain disruption. In the current operating environment, these additional costs simply cannot be absorbed and will have to be passed on to consumers in the form of higher prices,” he warned.

According to Mr Bain, it is not just households on the island of Ireland that would take a Brexit hit. “Those in Britain will see the price of goods from Ireland and Northern Ireland rise. Our supply chains are highly integrated, with food ingredients coming from both Ireland and the EU, and 60 per cent of the £2 billion [€2.3 billion] of NI agri-food bound for Britain crosses the Irish sea via Dublin,” he said.

1 If tourists are such pariahs should we not be testing them on arrival?
2 ‘My rent here is so low it’s a joke’
3 Varadkar and Donohoe to meet banks to discuss mortgage breaks
4 Can Grafton Street stop the flood of closures?
5 Belgium helps Ireland to a Brexit boon
6 Ashford Castle hotel resort sold for €20m
7 New Powerscourt Springs hotel to open in defiance of virus gloom
8 Varadkar to meet banks in row over interest on mortgage payment breaks
9 Why gift a son now if it eats into his tax-free inheritance threshold?
10 Pharmaceutical industry signals it won’t extend drugs agreement
Real news has value SUBSCRIBE