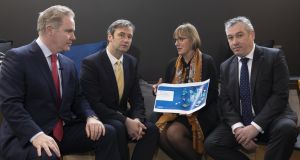 There were open mouths all around at an Enterprise Ireland’s fintech-focused event earlier this week after Avolon chief executive Dómhnal Slattery used his keynote speech to lambast the State body’s paymasters.

The event might have been titled “Appetite for Disruption”, but EI representatives certainly didn’t look as though they were hungry to hear more after a strongly-worded commentary that will have left a nasty taste.

Slattery went at it with guns a-blazing as he outlined how the State is failing to foster entrepreneurship. He said that, while there is “no shortage of innovators and pioneers” in the Republic, few get the support necessary for them to succeed.

“Entrepreneurs create jobs. They don’t make a living, they make lives. They are the oxygen every economy needs,” said Mr Slattery. “My feeling is that we are unnecessarily starving our economy of this oxygen.”

The businessman went on to criticise the Government for failing to promote entrepreneurship in the classroom and highlighted a need to attract more smart capital and provide a greater number mentors for scaling companies.

As if that weren’t enough, he also called out the State for its failure to do more on the tax front to encourage investors to back start-ups.

Much of what the entrepreneur had to say would, in fairness, be hard to knock, particularly in terms of incentives for investors.

Slattery is just one of many commentators to highlight how the State seems content to continually ignore those prepared to take big financial risks to back early-stage companies.

It is even possible that some in Enterprise Ireland agree with the businessman on these issues. However, the comments have also likely embarrassed the organisation which organised the event to attract major fintech players visiting Dublin for the European Financial Forum.

This is a pity given that EI has done plenty to support local start-ups. Worse though is the fear that Slattery’s comments may fall on deaf ears.

The most senior Government representative at the event was Minister of State for financial services, Michael D’Arcy, who scarpered just before the entrepreneur took to the stage.