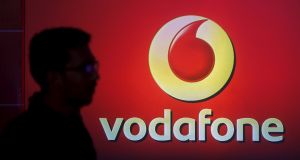 Telecoms company Vodafone continued to grow its Irish customer base in the third quarter of 2016, reaching almost 2.3 million people.

The company, which provides mobile, broadband, fixed-line and TV services to Irish customers, said it grew by more than 13,000 customers in the period, and saw continued growth in its mobile and fixed-line business. Underlying service revenue rose 1.4 per cent year-on-year, with total service revenue reaching €235 million for the period.

Mobile data usage continued to show strong growth, with a 9 per cent rise compared to the previous quarter and more than 41 per cent compared with the previous year. The company also said the number of 4G enabled devices on its network increased 7.5 per cent quarter-on-quarter to almost 1.2 million.

The Irish business said it would invest more than €250 million in 2016/17 across fixed, mobile and an IT transformation programme.

The parent group, Vodafone plc, said it would meet the “lower end” of its earnings guidance for the full year as its battles intensifying competition in India and Britain.

The difficult performance in India, where new entrant Jio has shaken up the market, overshadowed continued growth in Europe, with the exception of its home British market. It reported a 1.7 per cent rise in overall organic service revenue for its third quarter.

Vodafone said on Monday it was in talks to merge its Indian subsidiary with local rival Idea Cellular in an all-share deal to create a market leader better able to take on Reliance Jio Infocomm.

Service revenue in Britain fell 3.2 per cent, which Vodafone said reflected increased competition in enterprise, an area of strength for the operator.

The company reiterated its target to generate at least €4 billion of free cash flow in the year to the end of March, but it said it now expected its core earnings to come in at the lower end of a range of 3-6 per cent growth. Analysts were expecting third-quarter organic service revenue excluding the Netherlands to grow 1.6 per cent.

The company’s reported service revenue was €12.3 billion in the three months to end-December, broadly in line with market forecasts according to a company-provided consensus.