Bono, the Edge and Paddy McKillen snr sold the leasehold to the Press Up Group in June 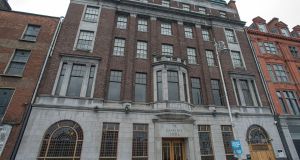 Dublin’s Clarence Hotel employs 50 full-time and part-time staff and Brushfield has a planning application before the city council for 54 new bedrooms that will add to the existing 59.

Profits at the four-star Clarence hotel, long associated with U2, fell by nearly a quarter last year.

Accounts recently filed at Companies Office show that Brushfield Ltd, trading as the Clarence Hotel, recorded profits of €764,963 – a drop of 23.5 per cent on the €1 million recorded in 2017.

Overseas visitors to the capital continue to be fascinated with U2’s association with the hotel, general manager Michael O’Connor said. “If I got a euro for every person who comes into the hotel and asks me about U2, I wouldn’t have to work every day.”

Mr O’Connor said visitors on tours of the city were told every day of the Clarence’s association with U2.

He said room rates had fallen because of the additional stock of rooms in the hotel sector in Dublin “but when large events are taking place in Dublin, there still aren’t enough hotel rooms for every one”.

The hotel employs 50 full-time and part-time staff and Brushfield has a planning application before Dublin City Council for 54 new bedrooms that will add to the existing 59. The plan is on hold after the council requested further information from Brushfield.

The boutique hotel was purchased by Bono, the Edge and a consortium of investors in 1992.