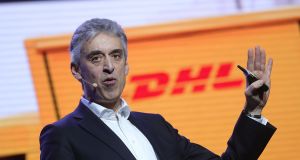 Deutsche Post DHL reported an almost tripling of third-quarter operating profit on Tuesday and said it expected a strong fourth quarter as it benefits from booming ecommerce and its freight division kept growing even as global trade slows.

The German post and logistics group saw third quarter operating earnings jump to €942 million from €376 million a year ago, ahead of average analyst forecasts for 890 million, while revenue rose 4.7 per cent to €15.6 billion.

The company said its international express business and the German parcel business grew especially strongly due to booming ecommerce and it confirmed its operating profit guidance for 2019 and through to 2022.

“For the fourth quarter, we anticipate a traditionally strong holiday season and we reaffirm our guidance for the full year 2019,” said chief executive Frank Appel.

However, its global forwarding and freight division still managed to grow revenues 0.9 per cent and increase its operating profit by 17 per cent to €124 million due to cost cuts. – reuters