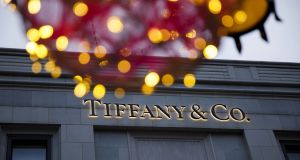 The results suggest Tiffany could be turning a corner after a difficult trading period. Photograph: Bloomberg

A stabilisation in sales in its all-important US market and strong demand in Asia helped Tiffany delivered better than expected third quarter results, sending shares in the high-end jeweller higher in pre-market trading on Wednesday.

The company, best known for its robin’s-egg-blue boxes, said sales for the three months to the end of October rose 3 per cent to $976 million (€825 million), handily topping expectations for smaller rise to $957 million.

Within this, comparable sales excluding currency fluctuations were flat, marking the first time in eight quarters that the gauge was not in negative territory.

The gains during the quarter were driven largely by sales in the Americas and Asia-Pacific - which rose 1 and 15 per cent respectively. The two regions are Tiffany’s biggest markets with sales collectively accounting for 72 per cent of the group’s total during the period.

Net income came in at $100.2 million, or 80 cents per diluted share. That’s a 5 per cent increase from the prior year period and ahead of the $95.5 million, or 76 cents a share, analysts were expecting. Profits were boosted in part by lower commodity costs which helped lift gross margin to 61.3 per cent from 61 per cent during the period.

The results offer some hope that business at Tiffany could finally be turning a corner after a rough year. In recent quarters, sales were hit by weak tourist spending, the strong dollar, and the drop in foot traffic at its flagship store on Fifth Avenue in New York following Donald Trump’s election as president.

Rising competition at the low end of the jewellery business from department stores such as Macy’s has further added to Tiffany’s pain. The company parted ways with Mr Bogliolo’s predecessor Frederic Cumenal in February.

Just weeks later, under pressure from activist investor Jana Partners, the company agreed to add three independent directors to its board, including Francesco Trapani, the former chief executive of Bulgari.

Shares in Tiffany, up more than a fifth since the start of the year, rose as much as 2 per cent in pre-market trading.