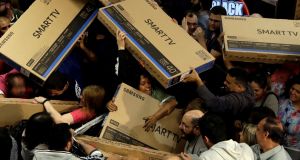 Shoppers reach out for television sets as they compete to purchase retail items on Black Friday at a store in Sao Paulo. Photograph: Paulo Whitaker /Reuters

US shoppers had splurged more than $1.52 billion online by Thanksgiving evening, and more bargain hunters turned up at stores this year after two weak holiday seasons as retailers opened their doors early on the eve of Black Friday.

At the start of the holiday season consumer spending rose 16.8 per cent year-over-year until 5pm on Thursday, according to Adobe Analytics, which tracked 80 per cent of online transactions at the top 100 US retailers.

Surging online sales and a shift away from store shopping have thinned the crowds typically seen at stores on Thanksgiving evening and the day after, Black Friday, for the past two years.

But a strong labour market, rising home prices and stock markets at record highs have improved shopper appetite this year. Crowds at stores in many locations around the country were reported to be strong, according to analysts and retail consultants monitoring shopper traffic across the US.

“The weather is cooperating and people here are out,” he said. The National Retail Federation is projecting that sales for November and December will rise 3.6 per cent to 4 per cent this year, versus a 4 per cent increase last year. Non-store sales, which include online sales and those from kiosks, are expected to rise 11 percent-15 percent to about $140 billion.

In New Jersey, around 50 people lined up a Macy’s at the Westfield Garden State Plaza mall before it opened and around 200 people stood outside the Best Buy store, many to pick up their online orders. “Me and my husband have a bigger place and we need a bigger TV for the living room,” said Jenipher Gomes, who bought a 50-inch Samsung TV at Best Buy for $399.99. Shopper Hammad Farooq said he waited at the store for an hour to shop for laptops and monitors. In Chicago, shoppers appeared to be slightly less enthusiastic to emerge from their turkey slumber and crowds were thin along the city’s popular shopping destination, State Street.

“There’s a few more people than normal but I wouldn’t call this crowded at all,” Deloitte auditor Eugenia Liew said as she shopped at discount retailer Target. “I expected a lot more people.” The holiday season spanning November and December is crucial for retailers because it can account for as much as 40 percent of annual sales. Retailers try to attract shoppers with deep discounts. Average discounts ranged between 10 and 16 per cent with the best deals online on Thanksgiving evening available for computers, sporting goods, apparel and video games, according to date from Adobe.

The number of customers shopping on their smartphones surged, accounting for 46 per cent of the traffic on retail websites, while traffic from desktop and laptop computers declined 11 per cent and nearly 6 per cent respectively, according to the data.