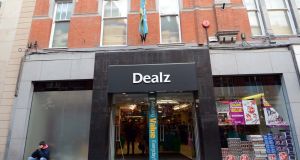 Discount retailer Dealz is to take on Penneys by putting value clothing and fashion into its Irish stores.

The chain, which is part of the same franchise as Poundland in the United Kingdom, plans to put Pep&Co clothing outlets into its larger stores here.

Pep&Co is owned by Poundland’s parent company, Steinhoff International, and already has 170 stores in the UK, 140 of which are located inside Poundland outlets.

Managing director Adrian Mountford told The Irish Times the concept was to bring discount family clothing to small- and medium-sized towns, where there was limited competition. More details of the outlets that will sell the range will be released in January.

Putting a complementary clothing offer next to a Poundland store in the UK has been very successful, he said, noting the company was struggling to restock womenswear to keep up with demand. “The link to Poundland, or Dealz in this case, is one of value,” he said.

Mr Mountford said the brand was examining which of the 60 Dealz stores in the Republic were big enough to accommodate a Pep&Co outlet.

‘Shop within a shop’ model

The Pep&Co chain was founded in 2015 by former Asda chief executive Andy Bond with the backing from the South African tycoon and Steinhoff shareholder Christo Wiese.

While the company has 40 standalone stores in the UK, the preferred model now appears to be locating inside bigger Poundland outlets – the “shop within a shop” model.

“The economics of having two stores in the same town paying two lots of rent, and two lots of service charges doesn’t make sense when you have one store big enough to house both,” Mr Mountford said.

He said combining with Poundland has also enabled the chain to grow much faster than anticipated. It recently opened several outlets in Northern Ireland.

“While we set out two years with a ‘fashion moderate’ ethos, we found that customers are increasingly buying into our more fashionable ranges,” he said.

The chain’s cheapest items, which sell for £1, include school polo shirts, baby body suits and flip flops while the most expensive item in its range is a coat for £28 (€31.50).

Dealz recently opened its 59th and 60th stores in the Republic in Douglas, Cork and Clarehall, Dublin, creating 50 new jobs. Since branching into the Republic in 2011, it has created over 1,200 jobs. It sells more than 1,000 products from baked beans to light bulbs.

1 Wild Geese: Ufurnish co-founder Deirdre McGettrick
2 Coronavirus: We must save lives but we also need to live
3 Grounded Aer Lingus pilots develop fix for turnaround glitches
4 Brown Thomas job cuts; sandwiches and Covid; and Ulster Bank’s blues
5 Moving in and out of lockdown is a recipe for economic disaster
6 Eir customers lose sports content over contractual row with Virgin Media
7 Brown Thomas and Arnotts to cut 15% of jobs due to coronavirus crisis
8 Close to 300 Greencore staff test positive for Covid-19 in Northampton
9 Irish plc executives set for Covid hit to pay following jump last year
10 ‘No demand... because there are no people’ at well-known Dublin pub
Real news has value SUBSCRIBE