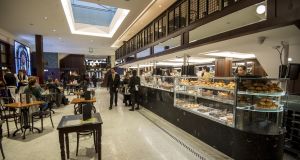 Bewley’s recently reopened the company’s Grafton Street cafe with capacity to seat 250 people. This will increase to 500 when upper floors are opened next March. Photograph: Brenda Fitzsimons

Irish coffee group Bewley’s expects to return to the black in 2018 once the last of the costs associated with the €12 million refurbishment of its Grafton Street cafe have passed through its accounts.

Bewley’s Ltd made a loss last year of €2.8 million, largely based on costs associated with the upgrade of its historic cafe, according to accounts just filed.

Bewley’s chief executive John Cahill confirmed to The Irish Times that it would make another loss in 2017, again due to costs connected with the Grafton Street project, but forecast that the company would return to profit next year.

“At an overall level, [we’ll make a profit] once we’re through 2017, and the last of the capex is completed,” he said.

Bewley’s recently reopened the Grafton Street cafe with capacity to seat 250 people. This will increase to 500 when upper floors are opened next March.

It is also planning to extend the opening hours and to introduce additional menu items, including hot breakfasts. This would see the cafe hosting about 1.5 million customers annually with turnover rising to between €10 million and €11 million a year.

And that would allow the cafe to make a profit in spite of the prohibitive €1.5 million-a-year rent.

Mr Cahill said trading at the cafe was “going well” with a “great reaction” from customers. “We’re moving to a run rate of €5.5 million to €6 million on 250 seats on the ground floor and some of the mezzanines,” he said.

Bewley’s accounts show that group turnover last year increased by 4.5 per cent to €162.6 million. Increased costs led to a reduced operating profit of €1.7 million, down from €3.2 million previously.

Mr Cahill said turnover this year would be lower due to sterling weakness while he expects a similar out-turn on its operating profit, and an overall loss. “We will have the write off the additional Grafton Street investment,” he said.

It completed a refinancing with Ulster Bank post the year end, giving the company an extra €7 million to fund Grafton Street.

With the UK accounting for 40 per cent of sales, Mr Cahill acknowledged that Brexit is an issue for the company.

“We have a project team supported by KPMG walking through a hard Brexit scenario . . . We’ve just acquired an adjoining premises in our UK roastery, which allows us to expand there.”

1 How long can Government afford to keep State pension age at 66?
2 Guinness brings out a non-alcoholic version of the black stuff
3 Frank Fitzgibbon stepping down as Sunday Times editor
4 How much will a Covid-19 vaccine cost?
5 Farm lobby seeks EU ban on vegan ‘burger’ and veggie ‘sausage’
6 How on earth do we the calculate the cost of Level 5 for the Irish economy?
7 Nest Audio review: A great speaker that also makes your home smart
8 Google's incredible power is the result of decades of regulatory failure
9 Paul Coulson plans record $1.8bn Ardagh investment
10 Budget 2021: fuel prices rise and high-emission cars hit
Real news has value SUBSCRIBE