The term, which has spread from the US to the rest of the world, was originally not positive 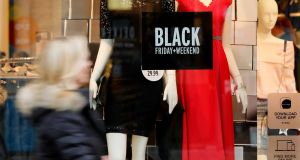 The word “black” in front of a day of the week has seldom meant anything good. Black Monday was the sell-off the day before the stock market crash of 1929, Black Tuesday, as well as the day of an even bigger crash in 1987. Black Wednesday was used to refer to a day of widespread air traffic snarls in 1954, as well as the day the British government was forced to withdraw a battered sterling from the European Exchange Rate Mechanism in 1992. Black Thursday has variously been used to describe days of devastating brush fires, bombings and athletic defeats, among other unpleasantness.

So how is it that the term Black Friday has come almost universally to denote joyous commercial excess, stupendous deals and big profits on the day when people head out to shop for Christmas after Thanksgiving in the US?

It wasn’t always this way. The New York Times first used the term Black Friday in an article in 1870 to refer to the day the gold market collapsed the year before. Ben Zimmer, executive producer of Vocabulary.com, who has researched and written about the term, says its association with shopping the day after Thanksgiving began in Philadelphia in the 1960s - and even then, the reference wasn’t positive.

Traffic and other miseries

Local police took to calling the day Black Friday because they had to deal with bad traffic and other miseries connected to the throngs of shoppers heading for the stores. Needless to say, that usage didn’t sit well with local retailers. They tried, according to Mr Zimmer, to give the day a more positive name: Big Friday. That did not take, but eventually retailers - in Philadelphia and beyond - managed to spin a new connotation: The day retailers’ books went from red ink to black. Most consumers probably don’t know - and don’t care - about any of this. All they want are deals. The rebranding of Black Friday has been so successful that others (both in the US and around the world) have tried to spread the wealth across multiple days of the week as the Christmas shopping season has grown ever more competitive.

In 2005, Cyber Monday was introduced as the day online retailers offered big savings to Christmas shoppers. In 2010, American Express came up with “Small Business Saturday” to encourage people to shop (presumably with their AmEx cards) at independent local businesses the day after Black Friday.

And as retailers begin their Christmas promotions earlier and earlier, there have even been efforts to change the name of the day before Black Friday to Grey, Brown or Black Thursday.