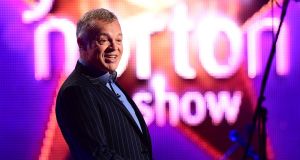 Norton presented 27½ hours of his Friday night Graham Norton Show in the period, and a one-hour special on the show’s Red Chair. The pay equates to €105,250 for each show — or €1,745 for every minute on screen.

The £2.613 million in presenter fees, production fees and royalties earned by the popular and charismatic BBC presenter was 3.5 per cent ahead of the £2.524 million he earned in 2015.

Publication of his first novel, Holding, last year prove that Norton’s talents extend well beyond entertaining millions of TV viewers every week. The novel was the third best selling book in Ireland in 2016 clocking up €620,000 in sales, selling 51,814 copies.

Norton (54) has also seen off the challenge of Alan Carr’s Chatty Man show on Channel 4 on Friday nights with his show remaining a “must do” for Hollywood A-listers promoting their movies in the UK and Europe.

US actor Will Smith recently praised Norton saying “he’s like the king of TV’, and backing the Irishman to have a successful career in the movies.

At the end of last July, Norton was owed £669,463 by production firm, So Television Ltd. Norton and the producer of the Graham Norton Show, Graham Stuart, sold So Television to ITV in 2012 with the media group agreeing to pay the two men £10 million up front. A further £7 million was payable depending on its performance up to July of last year.

ITV will also be happy with the deal despite the fees that Norton commands as pre-tax profits at the firm last year rose by 24 per cent to £2.45 million on revenues that increased fractionally to £11.78 million, from £11.57 million the previous year.

A breakdown in revenues show that last year revenues in the UK dipped marginally from £8.2 million to £8.1 million while revenues from the ‘rest of world’ were higher at £3.39 million compared to £3.35 million a year earlier.

According to the directors’ report, “the Graham Norton show continued to perform very well, both in the UK and internationally, leading to increased distribution sales”.

Born in Dublin and raised in Bandon, Co Cork, Norton first shot to prominence in 1996 for his part of Fr Noel Furlong in Father Ted before he moved to Channel 4 to host his own chat show.

Awarded an honorary doctorate by UCC in June 2013, Norton established So Television Ltd with Stuart in 2000. Remuneration to the firm’s eight directors, who include Norton and Stuart, remained static last year at £250,000.