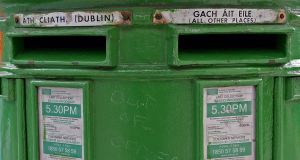 Citypost plans to use An Post’s network to handle some items.

Independent mail operator Citypost plans to challenge An Post with a new service for businesses that will be up to 20 per cent cheaper than the State company’s. Citypost is launching a new collection and delivery service for businesses, Postal Pick-up, which will charge 79 cent for a basic letter, 21 cent less than the €1 charge for a stamp that An Post introduced last month.

The company’s director of strategy and regulation, Bob Phillips, claimed that its services would be cheaper across the board. “Typically they will be better by 10 to 20 per cent on a like-for-like comparison,” he said.

An Post sparked criticism last month when it increased the price of a basic stamp to €1 from 72 cent and boosted the cost of other postal services at a similar rate.

The troubled State company’s chief executive David McRedmond argued that the increases were an essential measure for the company. Reports indicated that An Post feared it would not be able to pay workers’ wages if it were not allowed to raise charges.

Citypost will collect and deliver mail in the normal way, and will use An Post’s network to handle some items. It has relationships with postal services in 200 countries so will cater for international deliveries along with domestic services.

Mr Phillips explained that the company would initially target businesses, particularly those that have to post large numbers of letters. He did not rule out extending the service to consumers. “The more customers we have the greater the opportunity to invest further if we need to,” he said.

The company has spent €1 million on a sorting centre in Dublin and is recruiting staff to work there, as well as on delivering and collecting mail.

Citypost pointed out that a recent survey by the Commission for Communications Regulation (Comreg) found that most mail originated with big businesses that are sensitive about price.

The same study found that companies were unhappy with rising postal charges but the service remained important to them, so they would not reduce the number of letters sent, even in the face of increased costs.

Citypost chief executive Ian Glass said on Tuesday it was clear that “Irish businesses want to pay less for their postal service”.

Comreg has licensed Citypost, which began life delivering “junk mail” that is brochures and marketing material for businesses. It has expanded into conventional postal services and has operations in the Republic, Northern Ireland and Portugal.