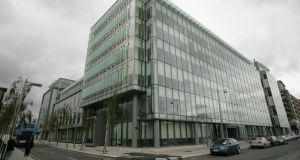 The Charities Regulator rejected some of the main arguments made to it by the charitable foundation of the corporate law firm, Matheson, over the past deployment of the foundation as share trustees to help hedge funds avoid tax.

Following media and political criticism over Matheson’s use of its registered charity in tax-efficient finance deals, the regulator last year commenced a review of the practice. It published its final report into the matter on Thursday.

The regulator did not name Matheson in its report, but it referred to its engagement with three charitable trusts, which it is understood were Medb, Badb and Eurydice, which jointly operated as the Matheson Foundation.

The regulator said it “raised concerns” with three charities, which were registered to alleviate “poverty and distress”, over their use as share trustees for US institutions housing risky financial assets in so-called “section 110” companies.

The charities’ justification to the regulator included that the use as share trustees for financial institutions was “ancillary” to the charitable activities.

They said some charities raise cash with “bake sales and poker classics”, while they chose to raise cash by providing financial services.

In February, while the review was still ongoing, Matheson unilaterally decided the three charitable trusts would no longer be used in this way, and they were deregistered from the official State list of charities.

In its report on Thursday, the regulator said it was “not convinced” by the argument that the Matheson Foundation’s financial services were merely ancillary.

“The Charities Regulator is not convinced by the arguments put forward by the entities concerned that their activities insofar as they consist of holding shares in section 110 companies are merely ancillary to their purpose.”

The regulator concluded that “the holding of shares in itself should not be the motivation and reason for a charity’s existence”.

Matheson, commenting on the review, said: “We note the publication of the report, in particular its acknowledgement that the charitable status of its shareholders does not affect the tax treatment of a section 110 company and ‘does not give rise to any tax benefits for the company from the use of such corporate structures’.”

Prior to abadoning the practice of using Medb, Badb and Eurydice to provide shareholder services to financial institutions, they were deployed for corporate clients including Mars Capital, linked to US fund Oaktree Capital, which owns swathes of distressed Irish mortgages, as well as Lambay Capital Securities, which pursued the State for a payout on old Anglo Irish Bank debts.

The charities were also used to set up Burlington Loan Management, a Dublin company linked to US fund Davidson Kempner, which mopped up Irish and European property loans including debts linked to the Titanic Quarter in Belfast.