Firm delivers for Littlewoods, Boohoo and Missguided and other organisations 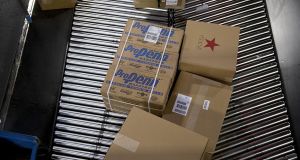 Fastway delivers through a franchised network of about 300 drivers around the Republic. Photograph: Getty Images

Irish and multinational-backed investor MML has bought a minority stake in Fastway Couriers for a figure said to be about €12 million.

Fastway delivers for online retailers such as Littlewoods, Boohoo and Missguided, small businesses and other organisations, through a franchised network of about 300 drivers around the Republic. It also owns the Parcel Connect drop off and collection service.

MML, whose backers include Enterprise Ireland, AIB, US-based Cigna Corporation and the European Investment Bank, has invested in the business alongside chief executive, Bobby O’Keeffe.

The fund has taken a minority shareholding – thought to be more than one third – of the five key companies that make up the group, including Fastway’s Dublin regional franchise, its sorting facility, logistics network and Parcel Connect.

It is understood that it spent a figure somewhere in excess of €10 million buying the stake. MML generally invests up to €12 million in the companies in which it buys shares.

The move has paved the way for two of Fastway’s original shareholders, Gerry Riordain and Andy Hennessy, to cash in their investments. Mr O’Keeffe intends to re-invest in the business, which he says needs to continue to adapt to its customers’ needs. He said that customers wanted to receive deliveries at their convenience rather than at a time and place that suited the courier.

“If you look at the e-commerce market it is changing at a rapid pace,” he said. “Customers want to get control of their deliveries, they don’t want their deliveries controlling them; that requires a lot of innovation.”

Mr O’Keeffe and Fastway Couriers Ireland developed Parcel Connect, which allows for deliveries to be dropped off and collected through a network of 1,000 convenience stores around the Republic.

Fastway’s original franchisors in New Zealand and Australia have since taken the idea and adapted it to their businesses. Couriers in the UK use a similar model developed at around the same time as Parcel Connect, according to Mr O’Keeffe.

The franchise began in New Zealand in 1983 and spread to Australia and South Africa before arriving here in 2001. Mr O’Keeffe became interested while he was working for tech giant Intel. He invested in the midlands regional franchise in 2002 and in Dublin three years later. He subsequently left Intel and joined Fastway, becoming chief executive in 2009.

MML Growth Partners Ireland is a €125 million fund specifically focused on small and medium-sized businesses. It typically invests between €2 million and €12 million in each company.

Neil McGowan, a director and the firm’s co-head of investment, said that Fastway was “growing very quickly against the backdrop of a rapidly changing and developing e-commerce retail space”.