Any IPO must be used to pay down debt rather than as an investor exit, says Eir chief 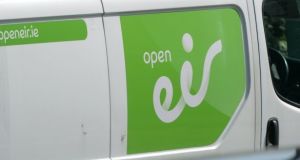 Eir’s main shareholders are committed for the long term as a future stock market flotation must raise money to cut its €2.13 billion debt mountain rather than give a group of US hedge funds and Singapore’s sovereign wealth fund a chance to cash in, according to the company’s chief executive.

Richard Moat, chief executive of the former Irish telecoms monopoly, told The Irish Times on Friday that the company could return to the stock market as early as next year, having abandoned an attempt at a third flotation in September 2014.

“We’re talking 2019, plus or minus a year. It’s a three-year window through 2020,” said Mr Moat, who originally joined the company in 2012 as finance director before becoming chief executive officer 2½ years ago.

However, he said that the proceeds from any share sale must be used to cut its debt levels to three times’ earnings before interest, tax, depreciation and amortisation (ebitda) from a ratio of 4.4, currently, in order to float and win new investors.

Eir would also have to show would-be investors as part of any initial public offering (IPO) that it is on a “clear trajectory” to cut its debt to two times’ ebitda “over a short space of time”, Mr Moat said.

The company revealed on Friday that its underlying revenue rose 1 per cent to €325 million year on year in the three months to the end of March, excluding the effects of currency movements and the regulatory restrictions on how much companies can charge rivals for terminating calls on their networks. This represented the eighth straight quarter of growth for Eir and compares with the fact that revenue had been in decline for years when, in 2014, the company abandoned plans for an IPO.

Eir has seen a big turnover in its main shareholders since its most senior lenders, then led by US private-equity firm Blackstone, took control of the group in 2012 as it went through a debt restructuring where €1.8 billion of borrowings were written off.

New York hedge fund Anchorage Capital is understood to currently own between 45 per cent and 49 per cent of Eir’s equity and a controlling voting stake. Singaporean sovereign wealth fund GIC and another hedge fund, Davidson Kempner, are the other two main shareholders, while Blackstone no longer features on the register of top 10 investors.

Eir’s ebitda rose 5 per cent to €374 million in the first nine months of its financial year as more customers signed up to the telecommunications group’s broadband offering even as mobile subscribers dropped towards the end of the period.

While the company’s number of mobile phone subscriptions rose by 5,000 during the nine-month period to 1,065,000, this follows a drop of 9,000 during the quarter to the end of December, which Eir put down to a decline in prepay customers.