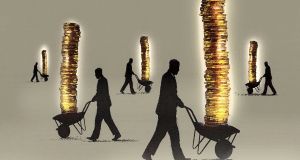 The company issued a statement saying the award of a “limited bonus” to Mr Fallon was “in line with the company’s policy”.

Pearson defended its decision to award chief executive John Fallon a 20 per cent pay rise in 2016 as the FTSE 100 education group prepares for a showdown with investors over the company’s poor financial performance.

In its report before the meeting, Glass Lewis said: “We remain concerned by the disconnect between bonus payouts and financial performance,” adding, “we do not believe shareholders should support this proposal”.

The move comes as the bosses of some of Britain’s biggest companies face contentious annual shareholder meetings that once again are highlighting investor unease at levels of executive pay. Drugmaker AstraZeneca, for example, suffered a significant shareholder protest on pay last week, while investors also signalled concern at Credit Suisse.

His base salary remained broadly flat at £780,000 but the overall value of his pay package was boosted by an annual performance bonus of £343,000.

The bonus came despite Pearson issuing its fifth profit warning of Mr Fallon’s four-year reign at the education group in January. With revenues from the US higher education business down by 18 per cent in 2016, the company also announced plans to slash its dividend this year, angering investors.

The news drove Pearson’s share price lower, wiping billions of pounds off the value of the company. On Friday shares closed at £6.39 – far below its recent peak two years ago when shares were trading at near £15.

Despite this, the company issued a statement on Sunday saying the award of a “limited bonus” to Mr Fallon was “in line with the company’s policy”.

Pearson added that Mr Fallon and chief financial officer Coram Williams will see their pay frozen in 2017, which it said reflected the “lower long-term profit expectations of Pearson.”

Elizabeth Corley, head of Pearson’s pay committee, also said in the company’s annual report, that the value of Mr Fallon’s long term incentive pay could be further reduced by “in the region of 20–25 per cent”.

Pearson has been upended by the shift from print to digital, as students ditch buying expensive textbooks for cheaper online or rented alternatives.

Mr Fallon, who has admitted he is “accountable for leading the company through a far more difficult period than anyone could have imagined” has so far resisted calls to resign, insisting he would now accelerate the group’s digital transition.

In April, Pearson revealed plans to make 50 popular titles available via a rental-only model through on-campus bookstores in the US while in January, it reduced the prices of 2,000 ebook titles by up to 50 per cent.

1 Identigen founders make €12m each from sale of company
2 State’s biggest landlord records 30% rise in rental income
3 What will the office market look like after the great remote working experiment?
4 MSD buys Takeda biologics plant in Dunboyne
5 Nine Goodman companies made largely untaxed profit of €170m
6 Revenues almost doubled at Voxpro ahead of €150m sale
7 More than 1,200 tracker-mortgage complaints await ombudsman ruling
8 Trump’s TikTok move may have far-reaching consequences
9 How safe is it to go back to the office?
10 Why the Covid-19 crisis may push up house prices
Real news has value SUBSCRIBE