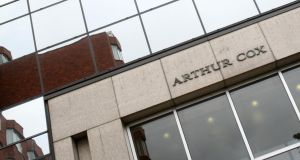 Law firm Arthur Cox has appointed Paul McBride, one of the North’s leading corporate lawyers and the head of rival firm Pinsent Masons’ Belfast office, as its new corporate and commercial partner at its Northern Ireland office.

Mr McBride, a graduate of Queen’s University, Belfast and Cambridge University, has more than 25 years of experience and has been closely involved in major acquisitions, mergers, management buys out and various investment projects in the North.

These included the sale by the private equity group, Terra Firma of Phoenix Natural Gas to Hastings’ managed fund Utilities Trust of Australia (“UTA”) and The Royal Bank of Scotland Group Pension Fund for an estimated £700 million.

Mr McBride, who is a partner in Pinsent Masons’ corporate group, also advised one of the North’s oldest family businesses, W&R Barnett on the £67 million acquisition of Tate & Lyle’s former molasses business.

His appointment to Arthur Cox in Belfast has been described as a “landmark development” by the law firm’s chairman and head of corporate and commercial.

Alan Taylor said: “Paul’s appointment is a landmark development for the legal sector in Northern Ireland and his expertise will add to our ability to ensure the successful completion of any kind of transaction.”