Smyths Toys to buy Toys R Us in Germany, Austria and Switzerland 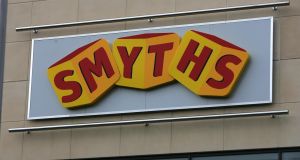 A statement on behalf of Smyths said it has “entered into a definitive agreement” to buy the tri-country Toys R Us unit, including its head office in Cologne

Smyths Toys, the Mayo family-owned retailing group, will almost double in size after agreeing a huge deal to buy rival, Toys R Us, in Germany, Austria and Switzerland.

The deal will add a further 90 stores to the group’s network of 110 outlets which are located in Ireland and, mostly, the UK. Smyths, which already had group sales estimated at about €600 million, is now among the largest specialist toys retailers in Europe. Smyths is now targeting further European expansion.

The notoriously-media shy family announced the deal on Saturday afternoon, but did not disclose any financial details.

A statement on behalf of Smyths said it has “entered into a definitive agreement” to buy the tri-country Toys R Us unit, including its head office in Cologne. The deal is subject to regulatory approval. Smyths said that all of the outlets acquired will be rebranded, bringing the Smyths moniker to continental Europe for the first time.

“We started the business more than thirty years ago and are very grateful to our customers, our employees and our suppliers for the support we have received,” said Tony Smyth, a director of the company.

“We are convinced about the future of multi-channel specialist toy retail and are confident that we can successfully introduce and grow our brand in continental Europe. The Toys “R” Us business is profitable, has a strong leadership team and already has many loyal customers. It provides a great starting point for our expansion.”

Last month, Toys R Us announced it was liquidating its US business. This weekend’s deal with Smyths requires approval from a US court.

With regard to the German and Austrian divisions, the deal gives the Smyth family an expansion platform denominated in euro currency. Over the last decade, the family has launched a huge expansion in the UK to leapfrog its specialist rivals.

However, the decline in the value of sterling since the Brexit vote has made the Smyth family’s hugely successful UK expansion less lucrative when translated back into euro.

The Smyth family, who rarely speak to the media and are notoriously protective of financial details, hails from Mayo but is associated with Galway, where the first dedicated toy store was founded by the Smyth brothers three decades ago. The genesis of the group lies in a family-owned shop in Claremorris, Co Mayo, which was opened by the parents of the current family members who are directors.

Four of the Smyth brothers are associated with the group - Tony, Padraig, Tom and Liam. Tony and Padraig run Smyths Toys, and their shareholdings give them joint control. Tony, an accountant is managing director and has been closely involved in planning the expansion, while Padraig is associated with toy buying.

The largest stakes of 27 and 31 per cent respectively are held by the Tony and Padraig. Tommy and Liam both hold stakes of about 18 per cent. Other family members hold the balance via an Isle of Man entity.