House of Fraser looks at restructuring to cut costs 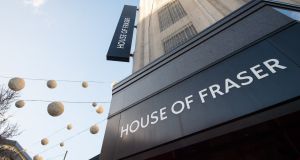 The embattled House of Fraser department store has appointed KPMG to advise on a restructuring plan for the business. Photograph: Dominic Lipinski/PA Wire

Embattled department store House of Fraser has appointed KPMG to advise on a restructuring plan for the business which could involve store closures and job losses.

The retailer, which is owned by Chinese conglomerate Sanpower, has drafted in advisers to look at a range of options, one of which could be an insolvency procedure known as a Company Voluntary Agreement (CVA).

Several retailers have pursued CVAs to save on costs this year. The procedure would involve House of Fraser seeking agreement from landlords to cut rents and possibly shutting some of its 59 stores.

However, the department store chain has not yet decided what form of restructuring it will opt for. The company is due to detail its turnaround plan in the coming weeks.

House of Fraser’s troubles came to the fore in January after it suffered a drop in sales over Christmas. The business has already started talking to landlords to reduce the size of its stores in a bid to cut its rent bill.

Sanpower chairman Yuan Yafei has voiced his commitment to House of Fraser and has been pumping millions of pounds into the retailer to keep it on an even keel. – PA