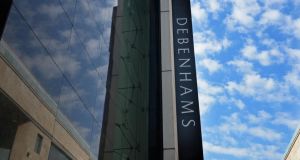 The Irish subsidiary of Debenhams, which trades out of 11 department stores, said it would not pay a dividend to its parent company this year after turnover fell 5.5 per cent to €170 million last year. Photograph: Eric Luke

The Irish subsidiary of department store chain Debenhams returned to the red last year, recording a €246,000 loss before tax.

The troubled Irish division, which successfully exited examinership in 2016, returned to a loss-making position in the 12 months ended September 2nd, 2017, having recorded a €19.6 million profit before tax the previous year after amounts owed to group undertakings were written off.

Debenhams, which trades out of 11 department stores and has an online presence, said it won’t pay a dividend to its parent company this year after turnover fell 5.5 per cent to €170 million.

The recently-filed accounts for Debenhams Retail (Ireland) Limited show some positives for the company with online trading improving. While the majority of the company’s sales were in-store, it grew its online sales to 14 per cent, from 11 per cent in 2016.

In 2016 the High Court approved a restructuring plan for the group, saving up to 1,330 jobs. The plan allowed the company to exit examinership, which it had sought because of consistent losses sustained since the recession, high rents and after the withdrawal of support of its UK parent, Debenhams Retail Plc.

“The external economic and commercial environment is expected to remain uncertain and volatile in 2018,” directors said in a note.

That assessment is a tad more downbeat than the previous year when directors said the successful restructuring and exit from examinership had “positioned the company well for a successful future”.

Debenhams Plc, the company’s ultimate parent, committed to providing loan facilities for three years from 2016 to the Irish arm. The directors state that the company has “reasonable resources to enable it to continue in business for the foreseeable future”.

However, the parent company issued a profit warning following Christmas trading, warning that store closures were likely this year.

A trading update from the 240-year old company this week reported an underlying pretax profit of £42.2 million in the 26 weeks to March 3rd, below the average forecast of £44 million.

The group is now forecasting a 2017-2018 profit before tax at the lower end of analysts forecast range of between £51 and £61 million.