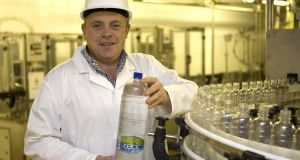 Celtic Pure, the Monaghan-based mineral water company, is building a presence in China and expects the market to be worth about €1 million for the company by 2020.

The water brand has begun to build a “small” presence in China through a distribution agreement which will take 24 container loans this year, rising to 100 loads by 2019.

The family company is hoping to increase sales by between 20 and 25 per cent this year and next with revenues up 30 per cent in 2017 as it plans to branch out in mainland Europe.

More than €12 million has been invested in the company since 2012 allowing it to increase production capacity by more than 100 per cent to 250 million bottles per year.

Aside from building a 115,000sq ft warehouse, Celtic Pure has also built a “syrup room” which will allow it to increase its product offering and by 2019 it will have completed construction on a robotic warehousing system and “smart storage”.

While Ireland remains the company’s largest market, Celtic Pure already sells to the UK and US and is planning sales in the Netherlands, Germany and Scandinavia later this year.