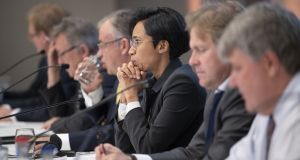 Heather Sonn, chairwoman of Steinhoff: “We want to uncover the truth, show the world was has happened, prosecute any wrongdoing and reinstate trust in the company.” Photograph: Jasper Juinen/Bloomberg

South African retailer Steinhoff is in talks with creditors about restructuring its debt, it said on Friday as it faced shareholders for the first time since an accounting scandal surfaced in December.

Steinhoff, which runs chains such as Dealz/Poundland and Mattress Firm, is fighting for survival after discovering holes in its books. The accounting scandal wiped billions off its stock market value and triggered a cash crunch.

“We want to uncover the truth, show the world was has happened, prosecute any wrongdoing and reinstate trust in the company,” chairwoman Heather Sonn said at the retailer’s annual general meeting in Amsterdam, where the company is registered.

Steinhoff’s financial situation remains “very challenged” and the company has been “drained of working capital”, the company said in a presentation.

Liquidity has been assured for now after €750 million was raised, partly through asset sales, though Ms Sonn said this strategy is not sustainable and debt needs to be restructured.

Ahead of a vote to re-elect directors, she said it was important to retain executives with knowledge of the company to ensure survival.