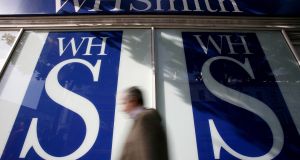 WH Smith has outlets in Dublin, Cork and Shannon airports, as well as a concession at Arnotts department store in Dublin. Photograph: Alessia Pierdomenico/Reuters

That comes against the backdrop of a 7 per cent turnover increase to €28.8 million in the Irish outlets of the chain ultimately owned by London-listed company WH Smith Plc.

The retailer of books, stationary, newspapers and magazines reported a gross profit margin of 54.8 per cent in the period, up from 47.4 per cent a year previous.

That improvement came as both distribution costs and administrative expenses increased almost 15 per cent to €13.3 million.

Across its outlets in Dublin, Cork and Shannon airports, as well as a concession at Arnotts department store in Dublin, WH Smith employed 163 people in the 12-month period, up from 150 the previous year. That ultimately led to a 7 per cent increase in its salary bill to €2.76 million.

WH Smith Ireland’s accumulated profits now stand at €4.79 million, as the group has battled back from a difficult period during the recession, when air travel slumped.

Although it paid an interim dividend of €2.5 million in October 2016, the company still had a healthy cash balance of €3.54 million.

The Irish results follow interim results from WH Smith Plc, released on Thursday, in which the group reported a 1 per cent drop in interim pretax profit on the back of difficulties at its high street retail business. Total revenue to the end of February had fallen 5 per cent with comparable sales down 4 per cent across that division.

However, those difficulties were somewhat offset by success in its travel arm where total sales rose 7 per cent for the interim period.