Profit in first half slumps 52% after poor Christmas trading 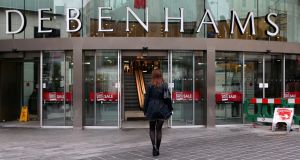 Department store group Debenhams added to the grim start to 2018 for the retail sector, lowering its full-year outlook for the second time in four months and cutting its dividend after a 52 per cent slump in first half profit.

Shares in Debenhams fell as much as 13 percent on Thursday, taking its year-on-year plunge to 61 per cent, before recovering much of that ground later in the session.

The 240-year old Debenhams, which delivered the sector’s first profit warning of the year in January, also said Matt Smith, its chief financial officer, was quitting to take up the same role at rival Selfridges.

The interim dividend was cut by 51 per cent to 0.5 pence to fund the recovery strategy.