Only a partial rescue of beleaguered chain, which has outlets in Ireland, may be possible 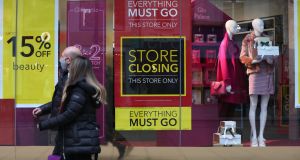 Mike Ashley’s Frasers Group is said to be getting closer to a deal to rescue part of the ailing Debenhams department-store chain.

The owner of the House of Fraser and Sports Direct chains is in negotiations to buy the 242-year-old Debenhams brand and website and to take on a substantial number of stores, said the people, who asked not to be identified because the information is private. Proposals from other bidders for parts of the business are still being considered, and there’s no certainty a deal will take place, the people said.

Debenhams currently has 124 stores, which are all rented rather than owned. If a deal is completed, thousands of jobs will be saved, although it is unlikely all 12,000 roles will be secure. Financial terms of the transaction being discussed were not available. Frasers chief financial officer Chris Wootton told Bloomberg Radio on Thursday that the company is conducting a detailed review to see whether it should save some or all of the Debenhams chain, indicating that only a partial rescue may be possible.

The eleventh-hour negotiations for Debenhams mark the latest stage in Ashley’s long and troubled involvement with Debenhams. Once the retailer’s largest shareholder, he saw his stake wiped out when lenders, including US hedge fund Silver Point Capital, took control of the business last year. The retail tycoon is estimated to have lost about £150 million.

Frasers held talks earlier this year with the administrator of Debenhams but then said it had been frozen out of the process and was not receiving adequate information. The company only re-entered talks with the owners and FRP Advisory, the administrator, after talks with JD Sports collapsed.

The retailer previously bought the House of Fraser department-store chain out of administration, a UK insolvency procedure. Combining the two could provide synergies.

While Debenhams has struggled in recent years, it still commands a large share of the beauty market and its website remains one of the most visited for fashion in the UK. Before the pandemic, the company’s annual revenue was about £1.8 billion. Even a partial rescue deal is still fraught with risk.

While Debenhams has used the pandemic and the current retail crisis to renegotiate rents on more favorable terms, it still has a heavy bill for business rates. The failure of Philip Green’s Arcadia Group, whose brands Topshop and Dorothy Perkins have concessions in the department stores, could also hurt the performance of Debenhams. – Bloomberg