Kildare woman told ‘we only make suits for men’ 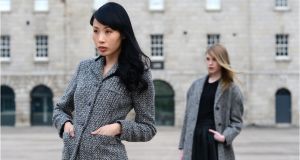 The Magee incident was highlighted on Joe Duffy’s Liveline show on RTÉ Radio 1 on Wednesday afternoon.

Menswear brand and retailer, Magee 1866, has defended itself from public criticism over an incident last weekend when it refused to tailor a custom-made suit for a woman who is due to get married next month.

The Donegal-based, family-owned business, which has been backed by Enterprise Ireland, said it was just a “misunderstanding” that Kildare woman, Maeve Wright, was refused service by staff at the Magee concession in Arnotts in Dublin city centre. Ms Wright was shopping for a “made to measure” to wear at her wedding in four weeks to her partner, Sara Shine.

The incident was highlighted on Joe Duffy’s Liveline show on RTÉ Radio 1 on Wednesday afternoon, leading to criticism of the company online. Magee’s chief executive, Rosy Temple – a fifth-generation member of the family that runs the group – went on-air to defend the business, insisting that Magee is “very much a company of 2020”.

Ms Wright and Ms Shine are due to marry in front of 25 guests in the second week of January. Ms Wright wanted to wear a suit by Magee, which says its made-to-measure service is for “men’s tailoring only”. She says she emailed Magee in August asking if the fact that she is a woman would be an issue, and she says she was assured it would not be.

Distressed, she went to a nearby Louis Copeland menswear outlet, which provided her with a suit for her wedding. After she contacted Liveline’s research team, but before they went on air, she was contacted by Ms Temple, who offered her an apology and a voucher.

On air, Ms Temple explained that the company plans to introduce a women’s tailoring service next year. She explained that its made-to-measure suits are currently “geared towards men” but that women could buy them if they choose.

On numerous occasions, we have had both genders buying our suits. There is no issue with it. It was a simple misunderstanding,” she said.

Magee, which is synonymous with tweed, is headquartered in Donegal town with two additional stores in Dublin. It also has a growing online export business. The group’s annual revenues are in the region of €15.5 million and it employed more than 120 staff prior to the pandemic.