Even Covid can't stem our love of retail therapy 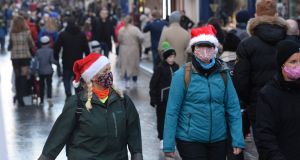 If ever there is a nuclear attack, two species are odds on to survive the fallout: cockroaches and Irish consumers. Both are stamped on, abused and occasionally scorned by their many detractors, who simply don’t like the look of them even though they’re basically harmless. Sometimes they may even go into hiding if it all gets too much to bear. But they always scurry back, seemingly unscathed.

Considering the year that they’ve had – hit by a plague and a dystopian upending of the old economic order – consumers ought to be cowering under their duvets, reading old shopping catalogues by torchlight, clutching credit cards, then sobbing themselves to sleep to a lullaby of store jingles.

Yet, there they are on course to spend almost as much this Christmas as last year and with consumer sentiment back up to where it was in March.

Irish shoppers are not illogical. KBC’s consumer sentiment index this week acknowledges that consumer conditions this month would be “mixed not marvellous”. But Irish consumers’ Chumbawumba-like ability to get up again in reach of some semblance of normality, in even the most hostile of environments, is remarkable and worthy of note.

Try as we might to deny it, rampant consumerism has been a feature of Irish life for decades. One of the most surreal things I have known in business journalism is the giddy ecumenical service that was held in 2005 to mark the official opening of the Dundrum Town Centre.

Okay, it was during the manic phase of the Celtic Tiger, when gathering a Catholic priest, a Methodist and a Church of Ireland minister to bless a shopping centre didn’t seem at all like a wacky thing to do. But still . . .

“God of Beauty, may we see in the magnificence of this centre a reflection of your beauty, variety, brightness and colour, may it fill us with wonder and may it raise our hearts and spirits to you,” they prayed, as recounted in a contemporaneous report by my Irish Times colleague Rosita Boland.

It sounds a bit psychedelic, reading that report back. Shopping, then and now, truly has become something close to a national religion. I wouldn’t be at all surprised if the sprawling Dundrum centre, one of the most successful malls in Europe, outlasts some of the churches in its vicinity. I’m neither lauding that possibility nor decrying it. Its mere plausibility is, objectively, the interesting part.

We can see with our own eyes today further evidence that retail therapy is one of the most resilient aspects of modern Irish life. According to various reports, when the first lockdown ended in early summer and Penneys reopened on Dublin’s Mary Street, people queued around the block from 4am.

You could write that off as an anomaly, a once-off collective freakout caused by the emotional stress of having just spent eight weeks locked up with nobody but our laptops to amuse us. But, again, there they were at the end of the second lockdown earlier this month, queuing around the block on Mary Street in the morning darkness, caring not a whit what anybody thought.

I have a sneaking sense of respect for it. It’s a bit like Javier Bardem in No Country for Old Men. Sheer, indivertible relentlessness. In fairness, the reports also suggest the Penneys customers didn’t begin queuing the second time around until about 6am, two hours later than the previous occasion. But I’m struggling to figure out whether, in an Irish context, that is progress or regress. Perhaps it had something to do with the solstice.

Three years ago this month, the Victoria’s Secret lingerie shop opened on Dublin’s Grafton Street, and they needed security staff outside to keep the women and girls in line. According to a report in this newspaper by Tanya Sweeney, the crowd started chanting “VS Dublin! VS Dublin!” as the staff cut the ribbon at 10am. It even attracted a sort of counter protest from animal rights campaigners, angry at the stocking of products tested on animals, in contrast to a previous long-standing policy.

There is just something about shopping that makes Irish people go a little swivel-eyed. If the medics ever get their way and pubs finally go the way of the dodo, we’ll just move all the sessions to Lidl and Aldi.

There is statistical evidence to back up this prejudiced, anecdotal truthiness. Ibec’s latest quarterly economic outlook highlighted how the predicted €4.8 billion of consumer spending this December is only a little bit below where it might have been if there hadn’t been a near-existential crisis for humankind. Recent monthly data from the digital payments platform Revolut shows that consumer spending in the prior two months actually was up on previous years.

And here is perhaps the most remarkable aspect of the whole thing: Irish consumers behave this way even when they are scared out of their wits.

Consumer sentiment data shows that people living in Ireland were among the most fearful of the virus at the outset of the pandemic, consumer activity briefly plunging in the spring by 40 per cent, the second biggest fall in Europe, before recovering at warp speed as we realised that the State was opening its coffers and this wasn’t going to be 2008/2009 all over again.

Recent research from Deloitte, meanwhile, shows Irish consumers were the most anxious in Europe for an eight-week stretch in the run-up to the recent lockdown. It didn’t stop a feverish national debate about the fairness of closing shops when there is scant evidence they contribute much to virus spread, nor did it prevent us spending like drunken sailors once we were let out again.

To be afraid, yet to persevere anyway, is supposed to be the hard-boiled definition of bravery. You can debate the merits and the relative bravery of, say, fearlessly dropping €500 on shirts and jeans versus the genuine bravery required to battle an illness or save someone from drowning.

Consumption isn’t literal bravery. We know that perfectly well. But, in its own way, it can demonstrate a form of individual resilience, a determination to keep on keeping on, no matter what fresh hell lies around the corner.

In a year turned upside down by an awful virus, when the everyday rituals of life were torn up in ways that we never imagined possible, the simple mission of making it to the shops, come what may, seems (to me at least) to be a very modern Irish way of coping.

If nothing else, it is something to smirk stubbornly about while we wait out the darkness of winter and the arrival of the vaccines. Merry Christmas.