Interview: Steven McKenna has taken over from the property business co-founder Mark FitzGerald 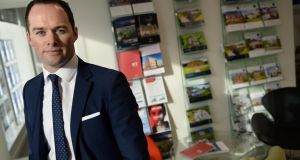 It’s 10am on Monday morning in Sherry FitzGerald’s flagship commercial property office in Ballsbridge. The calm before Storm Ophelia.

Staff are at their desks but the estate agent’s chief executive Steven McKenna has decided that all of its offices will close by midday as a precaution against the extreme weather that is coming.

“We cancelled viewings yesterday [Sunday] afternoon and this morning we made the decision to close the offices at 12,” he explains. “It wouldn’t be one of the more disruptive days for it to take place from our point of view.”

It’s four months since McKenna became chief executive at Sherry Fitz, taking over from co-founder Mark FitzGerald, who led the business for 35 years and is one of the best-known estate agents in the State.

McKenna has big shoes to fill. “They certainly are, Mark has been pretty influential, not just in this business but in the industry. Very innovative and entrepreneurial.

“My appointment is at a different stage of the business cycle,” he adds, citing three main strands to his vision for the company. “Brand, people and technology are the areas I’m focusing on at the moment.”

He sees technology “as the really exciting area in the next few years” although new online-only agents are threatening to disrupt the traditional business model of estate agents.

“It’s not my vision to move online [exclusively],” he says. “We’re staying core to what we do. We’ve 95 offices, employing 650 people across the country. We have a national brand with local expertise. That’s what creates the value in the transaction for both the buyer and the vendor.”

Nonetheless, McKenna has earmarked a €1.5 million investment in technology for 2018, which will involve a revamp of its online platform, MySherryFitz.ie.

It has also started offering virtual reality (VR) tours of new build sites, and has been hiring staff with digital skills.

“Once we have drawings of a site development, we can start developing the VR. In Greystones, we would have had the oculus [headset] glasses in our branch for potential buyers to use.

“It’s really interesting to see the children’s reaction when they can see what their bedroom will look like. There’s an excitement and a buzz to that and it gives people a better sense of scale.”

McKenna accepts that its current website “needs modernisation”. He also wants it to better showcase the agent’s mortgage offering, with Sherry Fitz a regulated broker. Last year, the company processed about 600 home loans, with a mortgage value of around €180 million.

“People aren’t necessarily aware that we have a mortgage offering. It’s only when they’re out doing viewings at the weekends that they hear about it. That’s the opportunity for us as a business.”

Sherry Fitz offers fixed and variable rates, receiving a 1 per cent commission from the lenders for each loan that it gets over the line.

McKenna insists there are Chinese walls to prevent potential conflicts of interest arising from selling mortgages to buyers on the one side, while seeking to maximise the value of the sale for vendors on the other.

“We segregate the financial services offering in an office in the IFSC and there are separate databases. Chinese walls are in place.”

Sherry Fitz will also process mortgages for properties being sold by rival agents. “We don’t care where they buy the property.”

With house prices currently rising by 12 per cent a year and the equilibrium between demand and supply completely out of whack, this must be a good time to be an estate agent?

McKenna disagrees, arguing that the current dysfunction within the Irish property market is bad for Sherry Fitz and the industry as a whole.

“We want to operate in a sustainable market,” he says. “My experience since joining Sherry FitzGerald in 2008 has only been in dealing with crisis, from property crash to the current growth. We need a sustainable market. We do better by selling more houses, not by relying on price inflation.”

“It’s not bad,” McKenna accepts, adding that it gives the company a near 15 per cent share of the market, rising to 23 per cent in the parts of Dublin where it has located offices.

What would McKenna do to solve the property crisis?

“There is no silver bullet [solution],” he says. “The introduction of the [vacant site] land levy… moving from 3 to 7 per cent, that’s a positive step and will result in more transactions. That combined with the CGT [capital gains tax] changes, with the [lock in on] relief being reduced from seven to four years will also help.”

He suspects there are “elements” of land hoarding by developers and investors, who are biding their time until house prices increase in value.

But McKenna believes the budget was a “missed opportunity” to incentivise investors. “There was nothing in the budget to encourage private landlords back in and I would be concerned that we could continue to see a tightening of rental stock available through 2018, which will lead to further rental inflation.”

He thinks rents next year could be 20 per cent above peak levels pre crash.

Not surprisingly, McKenna was happy to see the Government retain the Help-to-Buy scheme for first time buyers and he also supports the Central Bank’s mortgage rules, which have come in for criticism from some property developers.

“If they were to be loosened it would lead to further price inflation,” he says.

How long before we get the demand-supply balance right?

Sherry Fitz charges the highest commission in the market at 1.5 per cent, and has a reputation for aggressively pricing properties at their upper limits. McKenna is unapologetic about this strategy.

“We work incredibly hard for our clients. Our USP [unique selling point] is to get the best return for our vendors. We are at the higher end of the [commission] rate but it’s value for money in terms of what we deliver for our customers.”

McKenna is an ACCA-qualified accountant, drawn to property via a circuitous route. He hails from Galway, where his father has a successful hairdressing business, Barry’s Hair Studio, employing 20 staff.

“My dad worked incredibly hard and I remember him coming home and doing his books. The ledgers would be out and he’d be counting the cash. I used to sit at the kitchen table with him and help do the books.”

His siblings Paul and Vicky work as stylists but “it wasn’t for me”.

“I was more comfortable on the numbers side and that’s where I helped out,” he says.

In addition, he had a “passion” for rugby, which led him to play as a winger for Connacht Schools, secure Irish trials at schools and under-21 level, and play for Irish Colleges.

In 2000, he signed a professional contract with Connacht but dislocated his knee and had two operations. His dream of a professional career was over after just one year.

He could have tried his luck in Britain but chose to focus on his business career, playing All Ireland club rugby with Galwegians.

“I was young, ambitious and hopeful but then it was gone in a flash and the phone stopped ringing.”

He trained with accountants EY and in 2004 travelled to Dublin, taking a position with Pascal Conroy’s Albion Properties, cutting his teeth in the industry.

“We landed and were staying in a Bondi hostel, and the very next morning I had an interview with Macquarie Bank and was given a job pretty much immediately.”

He worked on a property fund for some months but got homesick and returned to Ireland that Christmas. His mother saw an ad in The Irish Times for a financial controller job in Sherry Fitz and said “accountant, property, back in Dublin, you should go for that, it’s perfect”.

He “quietly looked into it” and was offered the job, starting in early 2008.

The timing was rotten. Sherry Fitz’s Irish business was turning over €45 million a year at the time but the economy crashed, reducing revenues to €15 million annually within three years. The company also had debts of €27 million.

“While it was incredibly challenging and difficult, it was also rewarding in that we didn’t close one office in that period,” he reflects, although wages were cut and its headcount reduced by 40 per cent.

A decade on, he’s now running the entire business, which is expected to post revenues of €40 million this year. Mark FitzGerald has taken a back seat as non-executive chairman, though he is still the major shareholder.

With FitzGerald now in his 60s, a transition in ownership can’t be too many years away. McKenna is a share options holder.

“It’s part of my agenda [a transition], but my main focus is on growing the business and enhancing its value. That benefits the shareholders. All opportunities are open to us but I don’t see anything imminent.”

Two new franchisees will be recruited in the “coming months”. “We would have a couple of acquisitions in the pipeline for the residential business that we’re looking at...niche players in areas around Dublin.

“We’re looking at acquisitions, looking at more franchisees. We’re even potentially looking again at London [it exited in 2011]. But the timing of Brexit will be important on that.”

Lives: Moved to Glenageary in May

Something we might expect: He sold his last home through Sherry Fitz. “An excellent service that exceeded expectations.”

Something that might surprise: Company policy precluded him from buying a home from Sherry Fitz. He eventually bought in Glenageary via rival JLL. “It was a struggle trying to buy in south Dublin while not from a Sherry Fitz agent. That took about a year. But we were lucky enough to find what I consider to be our dream home.”