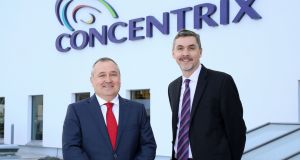 Concentrix, the American business services company, says its new £14 million purpose-built facility in the heart of Belfast, which it officially opened on Thursday, represents “exciting aspirations” for its Northern Ireland organisation.

The American group’s new 130,000 sq ft European customer engagement centre is located on the site of what was previously the Maysfield Leisure Centre, one of Belfast’s best known landmarks.

The centre, which was previously owned by Belfast City Council had lain derelict from 2004 until Concentrix acquired it from the council in 2014.

Philip Cassidy, senior vice president with Concentrix, said the group had wanted to stay in the city centre and is delighted to have been able to have brought the Maysfield centre “back to life” for a whole new purpose.

According to Concentrix it views its new Belfast centre as a “beacon for the significant growth planned for the coming years”.

Mr Cassidy is one of the original entrepreneurs who set up Gem, a multi-lingual contact centre, which Concentrix acquired in 2011.

He believes the new facility in Belfast represents the next chapter for the business he initially founded and then helped to grow with its American parent firm.

“Since 2000, Concentrix and previously Gem, has played a key role as a heavyweight employer in Northern Ireland and we invest heavily into the local community.

“During the last 17 years we have contributed over £300 million to the Northern Ireland economy through salaries and employment related taxes. This figure is set to increase as we fulfil our vision of expanding our European business,”Mr Cassidy said.