KPMG comes under increasing pressure in SA over Gupta links 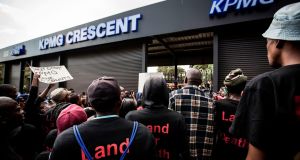 KPMG is coming under increasing pressure in South Africa over work done for the wealthy Gupta family, with finance minister Malusi Gigaba calling on all government entities to review work with the auditing firm.

An influential business lobby group suspended the company’s membership and the governor of the central bank said it was concerned that KPMG’s internal standard controls aren’t of an acceptable quality.

“As a measure to restore confidence in audits, all of government and its entities must consider reviewing their work programmes with KPMG to ensure their audit processes haven’t been compromised in any way,” Mr Gigaba said in a statement. Law enforcement agencies and bodies such as the Independent Regulatory Board for Auditors should also look into the matter and impose sanctions, he said.

KPMG, one the world’s so-called big four accountancy firms, is emerging as the most prominent international company to be snared in the South African scandal, after admitting that work for the Guptas fell short of acceptable standards. The family are friends with president Jacob Zuma and in business with one of his sons, and have been accused of using the connection to influence government appointments and win lucrative state contracts. They and Mr Zuma deny wrongdoing.

The accounting firm said last week that eight senior executives from its South African office had quit and that it would donate 40 million rand ($3 million) to anti-graft and education charities. It also offered to repay the 23 million rand fee it received for the work done for the tax authorities. The mea culpa has done little to stem the flow of recriminations in the country.

Sasfin Holdings, a financial-services company, said on Tuesday it replaced KPMG as its independent sponsor and is seeking a new auditor, while lenders including Barclays Africa Group and Investec said they are reviewing their relationship. Sygnia, a Cape Town-based money manager, terminated KPMG’s services in July, while Hulisani, an energy investor, is seeking shareholders’ permission to replace KPMG with PricewaterhouseCoopers .

Shortly after Mr Gigaba’s statement, the National Assembly’s medical-insurance plan also said it had decided to drop KPMG. Business Leadership South Africa, which includes chief executive officers of some of the country’s largest businesses, said earlier on Friday that KPMG has been suspended from the group pending the outcome of an independent probe into its involvement in so-called state capture, or the influence of private interests over political appointments and state contracts.

The Democratic Alliance, the biggest opposition party, said in a statement it will review all KPMG contracts in the the more than 30 municipalities it controls. The party runs Johannesburg, the financial centre, and the capital, Pretoria, in cooperation with other smaller parties.

KPMG’s internal inquiry criticised its work for the Guptas, and said the company should’ve resigned as their auditors sooner than March, 2016. The report said work on the Guptas’ acquisition of a coal mine and the attendance of four KPMG partners at a Gupta family wedding was particularly questionable.

“These developments further threaten to undermine our efforts in reinforcing confidence and enhancing a climate for investments, both domestic and international,” Mr Gigaba said.

1 Fianna Fáil may have just pressed the pause button on the property market
2 Who are Ireland’s 17 billionaires?
3 Saudi prince’s WhatsApp account ‘directly involved’ in Bezos hack
4 New blow for Ted Baker as accounting scandal doubles in size
5 European investor acquires Harcourt Road offices for €55m
6 Corporate tax change is inevitable, says Donohoe
7 Are there annual limits on inheritances or gifts to a child?
8 Irish organisations struggle to comply fully with GDPR
9 O’Flynn company ‘mistakenly’ got go-ahead for Birmingham project
10 My father in a nursing home wants to gift me his house
Real news has value SUBSCRIBE