Major blow to State broadband scheme as Siro drops out

Eir and Enet the only two left in procurement race 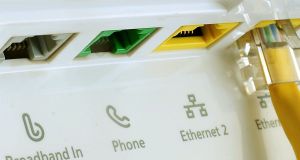 Siro’s decision to exit the broadband race comes just five months after the Government controversially removed 300,000 homes from its original plan and placed them back into Eir’s commercial rollout plan.

ESB and Vodafone joint venture Siro has dropped out of the Government’s National Broadband Plan (NBP), suggesting there was no longer a “business case” for its continued participation.

The move is major blow to the process, which aims to bring high-speed broadband to rural Ireland, as it leaves just two potential bidders - Eir and Enet - in the procurement race.

This is likely to result in a less competitive tendering process, which could inflate the State subsidy required and/or extend the rollout period, which has already been delayed several times.

“Following a comprehensive review, Siro cannot develop a competitive business case to justify continued participation in the National Broadband Plan bid process and therefore has decided to withdraw,” the company said in a statement, noting its original plan to build a high-speed fibre broadband network in 50 regional Irish towns would be unaffected by the decision

Chief executive Sean Atkinson said the decision to withdraw had not been taken lightly.

“We will continue with our original plans focusing on transforming Ireland’s regional towns, putting them on a par for high speed connectivity with cities like Tokyo and Hong Kong,” he added.

The company’s decision to exit the race comes just five months after the Government controversially removed 300,000 homes from its original plan and placed them back into Eir’s commercial rollout plan.

Siro had long viewed the 300,000 homes as the quasi commercial end of the project, suggesting their removal had undermined the viability of the scheme for the other bidders.

Anne O’Leary, chief executive of Vodafone Ireland, added: “Naturally we are disappointed that Siro is withdrawing from the National Broadband Plan tender, but our vision of creating a Gigabit society in Ireland is unaffected as the Siro roll out continues as part of our €450 million investment with ESB.”

Also commenting on the decision Pat O’Doherty, chief executive of ESB said: “Siro’s withdrawal from the National Broadband Plan tender process was a difficult decision, it was made on the basis that Siro was unable to make a business case for continued participation in the process.

As it stands, the Government’s plan now covers 542,000 homes and businesses in rural Ireland.

Eir has been accused of gaming the Government’s process by including the 300,000 homes in its commercial rollout at the last minute having previously deemed them uneconomic.

Mininster for CommunicationDenis Naughten said he had received “detailed submissions” from the two remaining bidders as per Tuesday’s deadline, marking another milestone in the process.

While acknowledging Siro’s departure, he insisted: “We are one of a few countries in the world that has a compelling competing operator to the incumbent.”

Enet said Tuesday that it would mount a joint bid for the National Broadband Plan contract with energy firm SSE.

The two companies earlier this month announced they had entered into a €100 million joint venture to supply fibre broadband to 115,000 premises in several west of Ireland towns.

Minister Naughten said the scheme remained on track and on schedule and that the Government’s plan would put every place name on the digital map.

It will be several months before the final bids, which will determine the overall cost of the plan, are submitted. The first homes are not expected to be connected until late 2018 or even 2019.

1 Working from home: New costs, new stresses and little relief
2 Joint accounts: if one of us dies, can the other access the money?
3 We are ‘sale agreed’, but can we go back with a lower offer?
4 HSBC board rethinks overhaul and seeks even deeper cuts
5 Investor alleges fraud over collapse in property fund value
6 DAA offers workers up to two years’ wages in redundancy plan
7 Fierce debate brews as EU Commission lays out recovery plans
8 Airline stocks take off as coronavirus worries ease
9 Electrical contractors fear closure under new pay law
10 Reads seeks injunction against Goodman family company over access to premises
Real news has value SUBSCRIBE