The Live Nation subsidiary behind the venue sees pre-tax profits rise to €8.09m in 2016 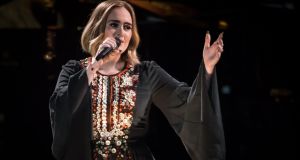 Sell-out shows from the likes of Adele, Rod Stewart, Justin Bieber and Paul Simon helped boost profits for the owners of the 3Arena in Dublin last year.

Newly filed accounts for Amphitheatre Ireland Ltd, the Live Nation subsidiary which manages and operates the venue, show its pre-tax profits climbed to €8.09 million in 2016 from €7.87 million a year earlier.

The jump in profits comes despite turnover dropping from €21 million to €19.2 million due to lower attendances.

Company directors forecast that about 596,600 attendees will visit the venue in 2017

With sold-out events from the likes of Ed Sheeran, Drake, Shawn Mendes, Radiohead and Bruno Mars taking place at the 3Arena this year, company directors forecast that about 596,600 attendees will visit the venue in 2017.

Earnings before interest, taxation, depreciation and amortisation (Ebitda) totalled €9.6 million last year, down from €10.4 million in 2015. The company expects current-year profit to be in line with 2016 levels.

Transactions between Amphitheatre Ireland and its parent totalled €2.3 million, the accounts show.

Live Nation took full control of the 3Arena in 2013, after acquiring the outstanding 50 per cent stake in the venue from the National Asset Management Agency (Nama) for a reported €35 million.

In addition to owning Ticketmaster and secondary ticketing markets Seatwave and Get Me In!, Live Nation also manages the Bord Gáis Energy Theatre, the Olympia and the Gaiety

The venue was sold as part of the receivership of loans connected with properties formerly owned by Docklands developer Harry Crosbie, who established The Point Theatre on the site of the 3Arena in 1998.

The venue, which has a 13,000 standing capacity, was renamed the O2 following a substantial revamp in 2008, before being rebranded again in 2014 following the takeover of O2 Ireland by Three Ireland.

Separate accounts filed for Live Nation Ireland Holdings Ltd show it recorded a €5.5 million profit in 2016, down marginally from the €5.8 million reported a year earlier.

In addition to owning Ticketmaster and secondary ticketing markets Seatwave and Get Me In!, Live Nation also manages the Bord Gáis Energy Theatre, the Olympia and the Gaiety.