Outlet operator says pedestrian and vehicular access will be affected 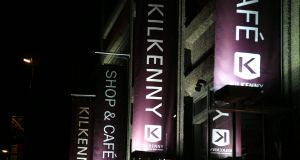 Clydaville Investments, which operates the Kilkenny store on Nassau Street, says the dispute arises out of a plan by the landlords, Setanta Centre Unlimited Company, to redevelop the centre.

The operators of the Kilkenny shop and restaurant in the Setanta Centre in Nassau Street, Dublin, fear the redevelopment of the centre will completely undermine that outlet if implemented in full, it has been claimed in Commercial Court proceedings.

Clydaville Investments, which operates the Nassau Street store and 16 other Kilkenny Group outlets specialising in the promotion of Irish food, crafts and design, says the dispute arises out of a plan by the landlords, Setanta Centre Unlimited Company, to redevelop the centre.

The redevelopment has been approved by Dublin City Council and An Bord Pleanála but Clydaville has objected to it.

Clydaville says new rules and regulations proposed by the Setanta owners, and due to come into effect on Thursday, will, among other things, interfere with pedestrian and vehicular access, including deliveries, to its Nassau Street outlet.

These “purported rules would completely undermine the operation of the business of the plaintiff if implemented in full, Clydaville finance director Conor Lynch says in an affidavit.

Notwithstanding his company’s objections to these rules, the defendant has conducted audits of compliance with them, he says.

The formal implementation of the rules has been postponed on two previous occasions and, in the meantime, the Setanta company received its final planning approval for the redevelopment.

Mr Lynch says the proposed rules have “nothing to do with the operation of the Setanta Centre but rather are designed to get the plaintiff out of the way while the redevelopment is executed”.

Despite getting agreement with Setanta that there could be temporary measures to comply with the new rules, in order that Clydaville did not seek an injunction to stop the redevelopment going ahead, it has not proven possible to agree how these measures would be implemented, Mr Lynch says.

Clydaville is particularly concerned about the practicability of restricting access for deliveries to the centre to four hours a day.

In the meantime, in its Commercial Court case, it seeks a number of orders and declarations including the prohibition on the implementation of the new rules and an order preventing the defendant from interfering with ingress/egress from the premises.

Mr Justice Robert Haughton, on consent of the parties, admitted the case on Monday to the fast-track Commercial Court.