House of Fraser in Dundrum likely to survive cull of branches

Dublin outlet, the only one in the Republic, outperforming many of group’s UK shops 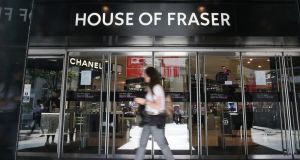 The Republic’s sole House of Fraser shop appears safe from the threat of closure hanging over some of the chain’s British branches. Photograph: Daniel Leal-Olivas/AFP/Getty

The Republic’s sole House of Fraser outlet appears safe from the threat of closure hanging over some of the chain’s British branches.

Sports Direct has denied UK media claims that it intended shutting many House of Fraser shops following the Christmas rush, but said it would target those that underperformed.

It is understood that the Republic’s only House of Fraser store, at Dundrum Town Centre in Dublin, is unlikely to face the axe as it is performing better than many of those in the UK.

London-listed Sports Direct conceded in July that House of Fraser was in decline and that many of its shops faced closure.

Mr Ashley has previously indicated that further branches could close as his company moves ahead with its plan for the group, which lost £55 million in its last financial year.

The Sunday Telegraph claimed at the weekend that documents from House of Fraser’s administrators, accountants EY, showed that Sports Direct intended shutting many of the chain’s shops and surrendering leases on the properties.

However, House of Fraser’s parent denied these claims and pointed out that it had entered new leases on the majority of its shops and was working on its investment scheme for the group.

Sports Direct pointed out that the document referred to leases held by the old House of Fraser owner and had nothing to do with its business.

Sports Direct took control of 59 shops, along with offices and warehouses, when it bought House of Fraser, which was struggling to repay creditors, last year.

British high streets face increased pressure as shoppers move online and rein in spending in the face of Brexit uncertainty.

Sports Direct did not respond to a request for a comment on its plans for the Irish shop.