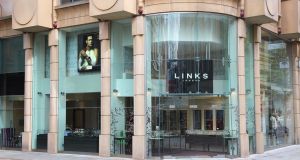 Greek jewellery maker Folli Follie’s Links of London appointed Deloitte as an administrator on Wednesday, putting about 350 jobs at risk and adding to the list of high-profile retailers to run into trouble on Britain’s high street.

Links of London was founded in 1990, offering unisex jewellery and lifestyle accessories, with luxury products designed after London’s art, music, and film scenes at the time.

Links of London said on its website it was unable to process any online sales, but directed people to its stores. The company sells its products through several Irish outlets, including Brown Thomas in Dublin. It also has standalone outlets in Dublin city centre and in Kildare Village.

“The company has had to contend with difficult trading conditions that have impacted the whole retail sector,” joint administrator Matt Smith said in a statement.

Mr Smith added that the directors had been seeking alternative solutions, including a company voluntary arrangement (CVA), refinancing or sale, but were unable to ink such a deal.

CVAs allow retailers to avoid insolvency by offloading unwanted stores and securing lower rents on others and reach a compromise with creditors. They have been adopted by other British retailers including fashion chain New Look.

Britain’s retail sector is still reeling from the collapse of well known names such as Debenhams, music store HMV and department store House of Fraser.

Deloitte said it will continue to run Links of London and will explore options for a sale. It also said no job losses were being announced at this stage and the company’s international operations were not directly affected.

Links of London, which sells luxury jewellery, watches, cufflinks and gifts, has a total of 28 standalone stores across Britain and Ireland and seven kiosks.

The jeweller’s Greek owners have also faced their share of troubles. Folli Follie in August mandated Deloitte and Savigny Partners to look into the possible sale of Links of London, which it bought in 2006.

Talks between Folli and its creditors over a rescue plan are at a “critical” stage and are expected to conclude in the coming weeks, its chairman said last month. – Reuters