Group now operates only in Ireland and Spain, after closing British stores 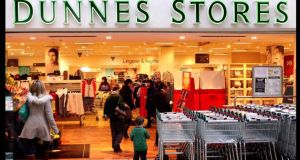 The group now operates only in Ireland and Spain, effectively abandoning the British market after 32 years.

Revenues in the Dunnes Stores unit that comprises its 15 stores in the North fell by more than 5 per cent to about £107 million (€119.3 million) last year, according to accounts recently filed.

Dunnes Stores (Bangor) returned to profit, however, compared to a heavy loss the previous year due to a writedown in the costs of its assets. It recorded a profit of £1.6 million last year, compared to a loss of £23 million in 2017.

The relative performance of Dunnes’ Northern Ireland stores compared to the previous year cannot be precisely ascertained from the financial statements, however. In addition to the NI stores, the Bangor unit also included the performance of some of Dunnes’s handful of stores in Britain, which were all closed down in the first three months of 2018, a period captured by the accounts.

The financial statements do not provide a breakdown in revenues between the Dunnes outlets in Britain and Northern Ireland, so the impact of the shuttered British stores cannot be stripped out.

The group now operates only in Ireland and Spain, effectively abandoning the British market after a 32-year foray.

Dunnes Stores (Bangor) employed an average of 1,110 staff in 2018, down by 120 from the previous year, its accounts show. The unit sits on accumulated profits of more than £48 million.

The group has already moved to extract much of the profits it made in the sterling-denominated British and Northern Ireland markets, translating those gains into euro before Brexit caused sterling to fall further.

In the months after the 2016 Brexit vote, entities in the Republic took a dividend of £250 million from Dunnes Stores (Bangor), while the following year, a further sum of close to £5 million was extracted.

The directors of the Bangor unit include group matriarch, Margaret Heffernan, her brother Frank Dunne, her daughter Anne Heffernan and niece Sharon McMahon.

1 Chris Johns: Boohoo exposed on pay and conditions in digital economy
2 In this strangest of recessions, what happens next for Ireland?
3 ‘Working remotely requires more individual contact, not less’
4 Hotel bookings collapse in wake of additional Covid restrictions
5 Should I switch bank now with Ulster Bank at risk of closing?
6 Michael O’Leary is the boss you want to lead an airline out of crisis
7 FBD changes wording of business insurance policies amid fight over virus payouts
8 Dunnes Stores set to enter grocery delivery market
9 Ireland’s Covid-19 economy in five graphs
10 Bank of Ireland sees about 2,000 staff apply for voluntary redundancy
Real news has value SUBSCRIBE