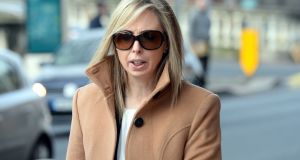 The Max Schrems data privacy case and General Data Protection Regulations (GDPR) preparations contributed to legal and consultancy costs at the Office of the Data Protection Commissioner (DPC) increasing by 140 per cent to €2.33 million in 2017.

Accounts show that the office spent €503,050 on a GDPR preparedness programme in 2017 ahead of its introduction last year.

The legal case for the DPC commenced in May 2016 when commissioner Helen Dixon sought a referral to the Court of Justice of the EU (ECJ) after reaching a draft view that Austrian lawyer Schrems had raised “well-founded” objections over the transfer of his personal data to the US.

The case continued into this year with the Supreme Court hearing a Facebook appeal over the referral to the ECJ and the court is to rule at a later date.

The Schrems case has cost the DPC €1.928 million to date.

The DPC has also expanded its data watchdog role due to the number of social media companies headquartered in Dublin.

Along with the additional workload from GDPR, the enhanced role for the DPC has been recognised by the government which has doubled the funding to the DPC over three years.

The 2017 Government allocation was €7.5 million and this has increased to €15.2 million for this year.

At the end of 2017, the DPC employed 52 people and a spokesperson said that it currently employs 134 staff and should reach 150 by the summer.

Underlining the pressure that the expansion has put on office accommodation, a note attached to the accounts states that during 2016 and 2017 the DPC exceeded the maximum capacity at its Fitzwilliam Square premises. These offices are provided free of charge by the Office of Public Works (OPW).

In a bid to alleviate constraints at its Dublin office, the DPC sourced additional accommodation which cost €130,006 in 2017.

The note states that discussions are ongoing with the OPW to identify a new permanent Dublin office but that it is expected that a suitable city centre premises may not be available to lease before 2020.

The DPC also operates an office at Portarlington, Co Laois which is provided free of charge by the OPW.

On the contingent liabilities faced by the DPC, a note states there are a number of cases before the courts which were due to commence in 2018 for which no provision had been made in the 2017 accounts