An Post to raise rates for large envelopes, packets and international postage 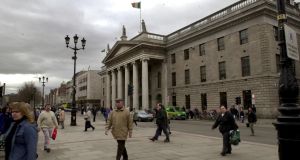 An Post is to increase its rates for large envelopes, packets and international postage from next month.

The State-owned provider of postal services, after carrying out its annual review of rates, said the €1 stamp rate for sending a letter within the Republic is to be maintained.

However, rates for large envelopes, packets and some parcels within the Republic are increasing by an average of 5.9 per cent.

International rates are increasing by an average of 7 per cent, while the base rate for sending an international letter is increasing from €1.50 to €1.70.

Rates payable to access the redirection service (used by people moving address) are being reduced with the introduction of a one-month service option as opposed to the previous three-month minimum.

An Post managing director for mails and parcels Garrett Bridgeman said the increases reflected the “increasing costs of sending mail items worldwide and of delivering to every home and business in Ireland every working day”.

“Where rates are being increased, the level of increase has been kept to the absolute minimum and against a backdrop where there has been decline of almost 50 per cent in transactional mail over the past decade.”

The increases will come into effect on February 25th.