Pret A Manger to swallow rival Eat in vegan push

Eat has struggled with competition in fast-food sector 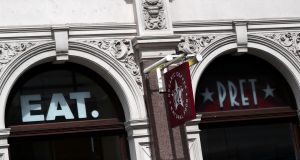 Eat and Pret outlets. Spending on plant-based food in the UK jumped by nearly a fifth to £315.2 million in the year to April.

Pret A Manger, the UK-based food-to-go chain, has finalised a deal to acquire its smaller rival Eat and transform the outlets into “Veggie Prets” in an attempt to take advantage of the growing number of vegan and vegetarian diners.

Pret plans to buy all of Eat’s 94 premises and convert “as many of Eat’s shops as possible” into Veggie Prets, which serve exclusively vegetarian options, the group said on Wednesday.

The value of the deal was not disclosed.

The UK sandwich-and-soup chain, which has more than 500 shops in nine countries, opened its first Veggie Pret in 2016 in central London and has since opened two more in the capital and one in Manchester.

Clive Schlee, chief executive of Pret, said that the acquisition was a chance “to turbocharge the development of Veggie Pret and put significant resources behind it”.

The first Eat shop was founded in 1996 near Charing Cross railway station. The chain was bought in 2011 by private equity firm Horizon Capital with a plan to triple the size of the business to 300 shops.

However, Eat has struggled with the growing competition in the fast-food sector and reported a loss before tax of £17.2 million (€19.4 million) in the year to end of June , 2018. In February Horizon Capital announced that it had appointed advisers Spayne Lindsay to oversee a sale process.

Pret, which was bought for £1.5 billion by Luxembourg-based investment company JAB Holdings in May last year, hopes to cater to the increasing number of vegan, vegetarian and “flexitarian” diners, who aim to reduce their meat intake.

Spending on plant-based food in the UK jumped by nearly a fifth to £315.2 million in the year to April, according to data from Nielsen, while overall spending on meat decreased 2 per cent to £8 billion. Research undertaken by supermarket chain Waitrose last year found that 21 per cent of the UK population identify as flexitarian, with the majority in urban areas.

Eat’s shops are predominantly focused in London with a small number in other major cities including Birmingham and Manchester and one at the Gare du Nord in Paris.

Andrew Aylwin, chairman of Eat, said: “Pret is a fantastic brand and this transaction represents a strong strategic fit with benefits for all concerned.”

JAB was founded to invest the wealth of Germany’s billionaire Reimann family. It has been on a deal spree across the consumer sector in recent years, racking up more than €50 billion of acquisitions including that of Pret A Manger last year. – Copyright The Financial Times Limited 2019

1 Ross O’Carroll Kelly column 'not racist towards English people'
2 Four things that could help Ireland escape the Covid-19 recession
3 Brown Thomas and Arnotts shoppers will be able to book time slots for entry
4 What is in the EU’s €750bn recovery plan and how will it affect Ireland?
5 Paschal Donohoe sees consumer ‘prize’ in slow reopening of economy
6 Tax and the Pandemic Unemployment Payment: Your questions answered
7 Working from home: New costs, new stresses and little relief
8 Irish economy to contract by 12%, ESRI forecasts
9 Irish banks’ failure to innovate could leave them written off for good
10 Beware of the rush to get back to normal business amid Covid-19
Real news has value SUBSCRIBE